As Jim’s career and family changed and grew in the 1960s, he and Jane first moved to an apartment in Manhattan and then to a large house in Greenwich, CT. It was a good place for a large family (by the end of 1970, Jim and Jane had five children) and Jim could rejuvenate himself after a heavy production schedule with a walk in the woods surrounding the house. They made good friends and continued living there or in nearby Bedford, NY. The demands of Jim’s work brought him all over the world, often for months at a time, but he valued the ability to get back to the quiet of the countryside or a view of the Long Island Sound when his work was done.

Learn details of the Henson’s Greenwich home and see how Jim used the wooded setting as an inspiration for his art. 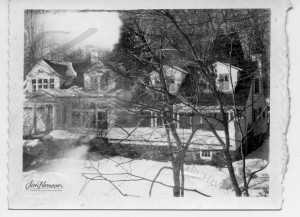 The Henson’s home in Greenwich, CT. 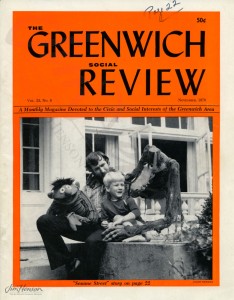 Jim and his son John (with Ernie and Lothar) in front of the Henson’s Greenwich, CT home, 1970.

This entry was posted in 04-April '64, 1964, Family and tagged Greenwich. Bookmark the permalink.