Kris Kristofferson and Rita Coolidge were among a very small number of duos that appeared together on The Muppet Show. Married at the time, they were held up by Piggy as an example of how married couples could work together. That didn’t stop her, however, from flirting shamelessly with Kristofferson during their song together. Coolidge, a Nashville native and country singer, and Kristofferson, a singer/songwriter and film actor, brought a variety of talents to the show and did several memorable songs both individually and, in the finale “A Song I’d Like to Sing,” together. Despite his Texas roots, Kristofferson would have felt at home in London having a Rhodes scholarship at Oxford among his many accomplishments. Jim enjoyed having the two on the show and noted that, “Kris is very funny and humble about his singing – I love it.”

A couple of very brief bits on the show without the guest stars hinted at Henson-related things to come. Dr. Bunsen Honeydew gave Beaker a grow pill, making him enormous, much like what happened to Animal in The Muppet Movie filmed later that summer. And when Wayne tried to sing “Wild Irish Rose”, a carnivorous plant chased him off the stage, anticipating, perhaps, the potential for the Audrey II puppet in Little Shop of Horrors in the early 1980s. 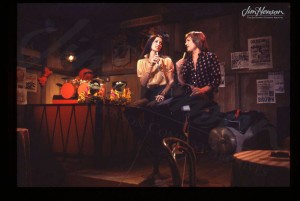 Kris Kristofferson and Rita Coolidge on The Muppet Show, 1978. 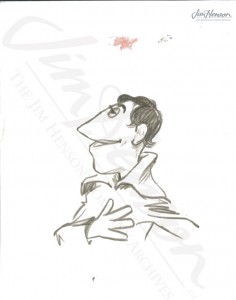 Michael Frith’s sketch of Wayne for The Muppet Show, 1970s.