When a teenaged Brooke Shields (just shy of 15) entered the Muppet Theater for her guest star stint, she literally fell down the rabbit hole and spent the show in a convoluted Alice in Wonderland themed story. She encountered the White Rabbit and Floyd as the caterpillar among other familiar faces. Gonzo was type-cast as the Mad Hatter. Like Alice, Shields had size issues and put herself in Dr. Bunsen Honeydew’s not-so-capable hands, eventually getting back to her normal size. Fozzie, meanwhile, was sad to hear that the Tin Woodsman was not in the story, and Dr. Teeth tried to cheer him up with his Cheshire-Cat-like smile. The Jabberwocky poem gave Jim a chance to bring out some of the more abstract characters as Rowlf and Scooter reveled in Lewis Carroll’s inventive language. A disastrous tea party finale was rescued by Fozzie leading the gang in a rousing rendition of “We’re off to See the Wizard.”

Shields was already known for acting in dramatic roles and modeling, but it was hard to see what she might do in a comedy/variety show. “We thought about it a lot,” Jim remarked, “and came up with the idea of ‘Alice in Wonderland’ as the show’s theme. Brooke seemed such a perfect Alice.” The book had been a childhood favorite of Jim’s, and several Henson projects in the ensuing years would relate to it, including Labyrinth. He had three daughters of his own and enjoyed working with one of their peers. Shields also seemed to have had a good experience, writing Jim an effusive thank-you note. Twenty-one years later, Shields joined the gang again for the Muppetfest live Muppet Show, gamely dressing as Miss Piggy. 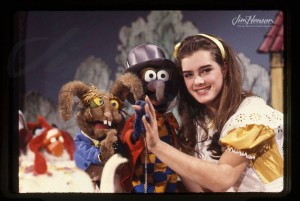 Brooke Shields as Alice in Wonderland on The Muppet Show, 1980. 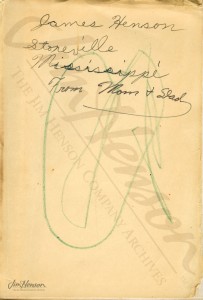 The title page and inscription from Jim’s childhood copy of Alice’s Adventures in Wonderland. 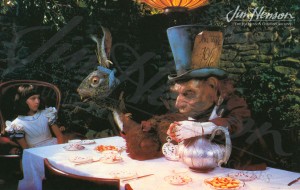 Henson Creature Shop characters created for Dreamchild, a 1984 film about Alice in Wonderland.

This entry was posted in 04-April '80, 1980, Muppet Show and tagged Brooke Shields, Labyrinth. Bookmark the permalink.