Marisa Berenson’s guest star turn on The Muppet Show came during a brief hiatus from her acting career which included roles in major films like Cabaret and Barry Lyndon. While musical/variety performance was not her focus, she trained as a singer and dancer alongside her acting lessons and was delighted to show off those talents with the Muppets. Jim noted in his journal that Berenson was, “…almost an ideal guest to me – she’s not normally in this area of show business – yet she did a lovely job – a pleasure to work with.” Clearly, Jim’s ability to bring out the most in his co-performers was at work here. As Berenson explained, “I’ve been taking singing and dancing lessons, and The Muppet Show is the first time I’ve had the opportunity to test myself in front of the cameras. Jim Henson encourages people to extend themselves. For any performer, that is an extremely valuable and unusual attitude.”

Miss Piggy had a major role in this episode, orchestrating an elaborate wedding production number for the finale. In a hint at what would happen in The Muppets Take Manhattan filmed five years later, she brought in a “real” minister (if you can believe that a pig is a real minister) and Kermit was fooled by Scooter into signing the marriage license. Kermit got the upper hand (flipper?), however, by introducing Lew Zealand and his Boomerang Fish instead of saying, “I do.” 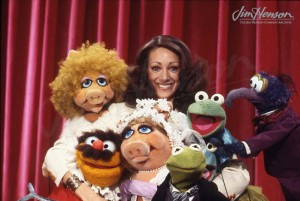 Marisa Berenson with the cast of The Muppet Show, 1978. 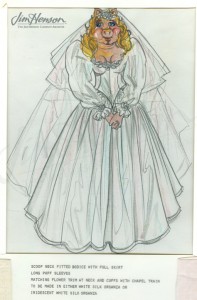 A wedding dress design by Halston commissioned as part of promotion for The Great Muppet Caper in 1981.