Had Jim’s Red Book covered 1989, he would have jotted down that on April 19, 1989, he and writer Jerry Juhl finalized the script for “The Secrets of The Muppets” for The Jim Henson Hour. This documentary style episode (which did not air as part of the original series) gave a behind the scenes look at many of Jim’s creative activities in the 1980s with particular emphasis on the technical side of the magic. Over the course of the hour, Jim took considerable delight in showcasing the recent digital aspects of his work including the computer generated set for the series and the creation of the CG character Waldo. Traditional Muppet-style puppetry was also celebrated and to emphasize getting great results from standard TV tricks, like cutting back and forth between a puppet dog and a live dog, the show starred Jojo, a curious pooch who asked Jim, “How do the Muppets work?”

It was no surprise that Jim and Jerry Juhl made a dog central to the action on this show. Going back to the very early 1960s, the two men developed numerous dog characters together, starting with Rowlf, and found it very easy to anthropomorphize the various personalities we all see in our pets. Dogs are often friendly, are described as loyal and caring, and they seem to relate to each other (and us) in very human way. Jim’s shows featured Rowlf, Rufus, and Foo Foo, and Sprocket helped tell the stories of Fraggle Rock. The Dark Crystal featured a dog-like character in Fizzgig, and Sarah was accompanied by Ambrosius in Labyrinth. The Storyteller starred a man (John Hurt) and his dog, and The Jim Henson Hour devoted a whole episode to the dog-populated world of “Dog City.”

Jim’s appreciation for the social nature of dogs was further emphasized in “The Secrets of The Muppets” when Jojo dropped in on a meeting of the O.M.D. (a.k.a. The Organization of Muppet Dogs). In a segment included for no other reason than to celebrate the myriad dog characters and their community, Rowlf welcomed Jojo into the group. Those canine comrades continue to inspire the creative team at The Jim Henson Company. When creator Howard Baker and producer Halle Stanford began development on a new pre-school series Jim Henson’s Teeny Tiny Dogs, premiering this month on Amazon.com’s Instant Video service, they looked back to that meeting of the O.M.D. to get a sense for the spirit of these dog characters. It was clear from the joy and humor shared by Rowlf and his peers that they were a good model for a program designed to cultivate happiness in the daily lives of children. Twenty-five years later, a new pack of playful Henson dogs are set to entertain and educate a new generation. 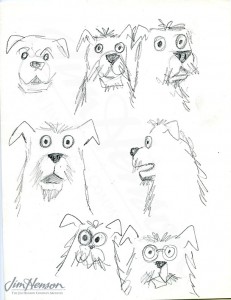 Jim’s dog design for a 1962 commercial. While this concept was not used at the time, he does bear some resemblance to Jojo in “The Secrets of the Muppets.” 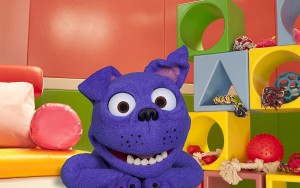 Dinky, member of the pack in Jim Henson’s Teeny Tiny Dogs on Amazon.com, designed by Howard Baker and built by Rollie Krewson, 2013.