After failing to get a network to pick up his series, Jim made a deal with English impresario Lord Lew Grade to make The Muppet Show with the stipulation that the show would be produced in the UK at Grade’s ATV studio. On hiatus from Saturday Night Live, Jim and his team shipped their entire puppet inventory to London and taped the first two episodes, featuring Juliet Prowse and Connie Stevens, as prototypes for the series. During his stay, Jim appeared on the popular British “chat” show produced by Grade’s company and hosted by Des O’Connor. As it turned out, going with Grade’s backing instead of a US network was a huge boon to the spread of Muppets around the world. Thanks to Grade’s distribution company’s international reach, Jim’s show was airing in dozens of countries within a year. 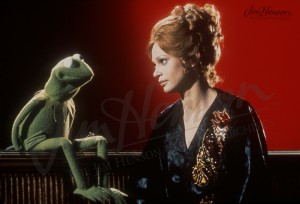 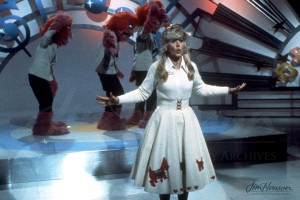 Connie Stevens dancing with The Mutations on The Muppet Show, 1976.

Michael Frith’s design for The Mutations, 1975.