With two major film projects in the works, Jim was eager to find a cinematographer that could translate his vision to the screen. This was especially important as The Great Muppet Caper and The Dark Crystal would serve as Jim’s feature film directorial debuts. While he was focused on both films, he knew what to expect with Caper and saw it as a vehicle to getting to know his cinematographer and cementing a working relationship for his masterwork, The Dark Crystal. Ossie Morris had been active in filmmaking since the late 1940s and had met with considerable success, particularly in the late 1960s and early 1970s with films like Oliver! and Fiddler on The Roof. Jim admired Morris’s skill and sought him out. In a 1982 feature in American Cinematographer magazine, Morris described how he and Jim began working together:

“Some eighteen months before The Dark Crystal started principal photography, I received a phone call totally out of the blue, asking me to meet Jim Henson and Frank Oz for dinner. An unusual film project was to be discussed, and they thought I might be interested. I cannot honestly say that my reaction to that phone call was totally enthusiastic, but as much out of courtesy as anything else I agreed to journey to London to meet them.

Jim and Frank revealed to me their idea of a movie to be called The Dark Crystal. I listened intently to all they had to say but still cannot honestly admit, event at this moment, that I was all that enthusiastic. However, on previous occasions I have had the same reaction to new projects and therefore felt it prudent to ask for time to consider what I might do.

As home, I talked at length about this with my wife and slept on the idea for many days. Even then I can’t honestly say that my thoughts about the movie had changed, but I did agree to a second meeting with Jim and Frank, where the movie was discussed in greater detail. I could begin to see the ideas that were being throught about, and I asked for one more brief respite before making my final decision. The idea at that stage was for a two movie project, The Dark Crystal being the second of two movies and The Great Muppet Caper being the first one. Jim felt that if we were going to undertake so vast a project as The Dark Crystal, it was necessary for us all to work together as a team ahead of time, and this proved to be totally justified.”

Morris signed on. They shot The Great Muppet Caper during the fall of 1980 and early winter of 1981. Just about six weeks after they finished, Morris got behind the lens again to start on The Dark Crystal. 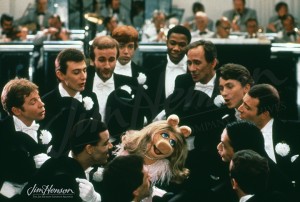 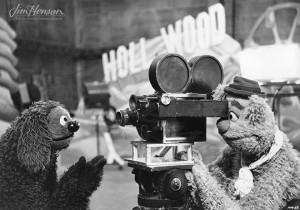 Fozzie, not Ossie, behind the camera.