For his ambitious film The Dark Crystal, Jim was eager to collaborate with excellent and innovative artists on all aspects including design, performance, cinematography and music. For the moody score, Jim turned to the young South African composer Trevor Jones who had made a mark with the score for the Academy Award winning film The Dollar Bottom. Doing pioneering work combining acoustic with electronic music, Jones was an ideal partner for Jim. He understood the sound that Jim was looking for and along with writing the score that was eventually recorded by the London Symphony Orchestra, Jones tracked down the 18th century double flageolet that was played to represent Jen’s twin flue. He wrote about his experience on the film:

“From the very first in scoring the music for The Dark Crystal, I set out to find two melodic ideas — one for the Mystics, the other for the Skeksis. These two motifs, when counterpointed, fuse to become one, and in the Great Conjunction at the film’s climax, they join to become the central theme.

In the Overture, this central theme is contrasted with the Landstrider motif, the nearest musical idea that not only provides good musical balance but, more important, reflects the fantasy world of the film; the melody line is played by one of over three hundred electronic sounds specially realized for the film on the Synclavier Computer, the Fairlight CMI Computer, and the Prophet Synthesizer, and used with traditional symphonic tone colors to heighten the orchestration. The Power Ceremony, which opens the film, fuses electronic sounds with the orchestration to provide a ritualistic and sinister atmosphere.

A synthesized organ accompanies the brass in the grandiose baroque setting of the Skeksis funeral. But the transition to the Mystic ceremony is made by a double-flageolet, an English Regency instrument acquired for the film because of its characteristic capability of simultaneously sounding two independent pitches. In the feasting scene in the Pod Village the merry-making is to the music of such medieval instruments as the grumhorn, titin, and tabor. The modern okema tlaves and the double-flageolet complete a line-up spanning five centuries of instruments.” 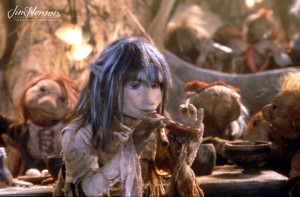 Jen playing his flute in The Dark Crystal. 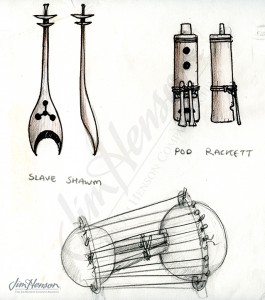 Musical instrument designs by Brian Froud for The Dark Crystal.