Jim’s appearances on Cher’s variety show in 1975 represented more important steps along the road to The Muppet Show. During the previous year or so, he had demonstrated that the Muppets worked well with celebrities, featuring Mia Farrow on The Muppet Valentine Show, and that they could hold their own for an entire half-hour, romping through The Muppet Show pilot Sex and Violence. Despite the fact that those shows aired on ABC and that the Muppets had success as guests on other ABC shows, the network passed on the series. Cher’s popular show aired on CBS, and it gave Jim an opportunity to display his talents there. More importantly, he got to work with Cher’s executive producer George Schlatter who was perhaps best known for producing a show that inspired Jim, Laugh-In.

In August, Jim and his team went out to CBS-TV’s studios in Los Angeles to tape pieces for two Cher shows. The first, scheduled to air as the season premiere, starred the Smothers Brothers as Cher’s co-hosts, and featured the Muppets and Bill Cosby as guests. One sketch had Dr. Teeth and the Electric Mayhem in a recording session with Cher and Bill Cosby. Another featured the fuzzy dog Rufus choking on cigar smoke as Tommy Smothers sang, “Smoke Gets in Your Eyes.” Sweetums helped out with some exercise nonsense along with getting a medical exam. For the second show that aired in November, additional segments were taped. These included Cher singing “Old Black Magic” and Kermit doing his unforgettable duet with Ray Charles of what would become a standard, Joe Raposo’s song, “Bein’ Green.”

By the time Jim got to California for these tapings, he and George Schlatter were already working together to pitch The Muppet Show to CBS. While Jim had the two ABC specials to show the network, he and Schlatter wanted to create a sort of long advertisement to catch the executives’ attention. To that end, Schlatter had Jim tape some banter between Kermit and Cher and also with her young daughter Chastity. They quickly went off script, with Kermit and Cher talking in innuendo, and produced some charming and hilarious moments. These became part of The Muppet Show pitch reel which also included clips from other shows and, as a grand finale, featured an enthusiastic Muppet salesman touting the show to the CBS executives by name. While a true tour-de-force, CBS passed. The reel, however, was put to use in discussions with Lord Lew Grade’s company in the UK who quickly snapped up the opportunity and agreed to finance and distribute the series. Jim finally had his show. 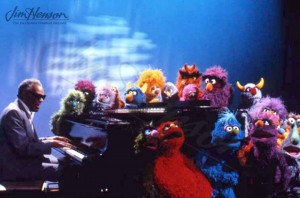 Ray Charles and some Muppets in 1989.