Given Jim’s admiration for the popular comedy show, Laugh-In, he must have enjoyed performing his characters with one of the show’s break-out stars, Goldie Hawn. For her television special, “Pure Goldie,” Jim flew out to LA with Frank Oz and Don Sahlin and taped several segments. Kermit appeared, chatting amiably with Hawn, and he was joined by a monster from Sesame Street who was simply called “the monster” in that script. He was, however, looking for cookies and eating anything that was circular in shape. A little later, he and Kermit returned to talk with Hawn, and then Kermit and Hawn sang “Bein’ Green” together. Hawn kissed Kermit, and rather than Kermit turning into a prince, Hawn turned into a Muppet version of herself. In trying to reverse the effect, she then kissed the other guests Ruth Buzzi and Bob Dishy who also turned into Muppets (Frackle puppets that had been created for The Great Santa Claus Switch earlier that year). After a little convoluted reasoning, the three Muppets decided to sing “Mahna Mahna” and revert to their human forms.

While the overall program got somewhat mixed reviews, the Muppet segments got high marks. Harry Harris, the TV columnist for The Philadelphia Inquirer wrote, “Jim Henson’s ‘Sesame Street’ Muppets…as represented by Kermit and the Cookie Monster, seem overdue for such prime-time TV take-over. The Goldie-Kermit collaboration was far and away the program’s highlight.” The reviews were unanimously positive in regard to the Muppets – Variety declared, “[Hawn’s] best routine was one with Muppets, and her experience with Kermit the frog was funny, indeed.” 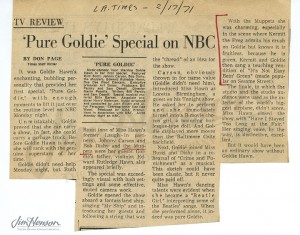 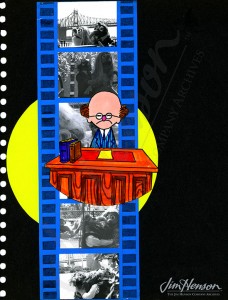 Jim used images of the Goldie Hawn puppet with Gonzo (then still a Frackle) in one of his Muppet Show pitches.