After making two television specials for ABC to serve as pilots for what Jim hoped would be a series, he still did not have a deal for The Muppet Show. His exclusive arrangement with ABC had given him hope that he would finally have his Muppets appearing each week during primetime on a major network, but ABC passed after the March airing of The Muppet Show: Sex and Violence. Undeterred, Jim and his agent Bernie Brillstein continued to try to sell the show and Jim continued writing up ideas.

The Muppets were booked to tape segments for CBS’s Cher show which was produced by legendary television producer (best known for Laugh-In) George Schlatter. In late July 1975, while working on the Cher appearances, Jim and George Schlatter started collaborating on a pitch for CBS. They devised a reel hosted by Kermit. It was about 25 minutes long and featured clips from much of the work Jim had done during the previous few years. Among the material were the barnyard animals from The Muppet Musicians of Bremen, the Big Boss Man bit from the Herb Alpert special, Mia Farrow and Thog from The Muppet Valentine Show, Julie Andrews and the Gawky Birds from her Sesame Street special, the Electric Mayhem and Statler and Waldorf from Sex and Violence, Cher’s duet with Sweetums, “Java” from Flip Wilson’s show, and some unscripted banter between Kermit and Cher’s young daughter Chastity that was taped backstage as an experiment. On August 30th, Jim went back to LA to tape Kermit’s introductions that would provide continuity and give the reel the feel of a Muppet Show episode. The purpose, he explained, was, “…to talk you into putting the Muppet Show on television…” For the finale, Jim created a piece ripped directly from his meeting film, “Sell, Sell, Sell” with a calm Muppet slowly building to a state of hysteria as he gets more and more excited about the prospects for a Muppet show on CBS. At the end, the camera cuts back to Kermit who looks at the viewer and asks, “What the hell was that?”

It was a quick “no” from CBS. Jim was finally willing to consider non-network options and responded positively to the overtures made by Abe Mandell, president of ITC, the US distribution arm of Lord Lew Grade’s television company in the UK. Jim was ready with his presentation film and made the deal. On October 22nd, Jim held a press conference at Manhattan’s 21 Club to announce The Muppet Show. Grade signed on for 26 episodes to be sold in first-run syndication for the 7:30 time slot controlled by local stations. As it turned out, the first group of stations to buy the program were all CBS affiliates.

Learn more about Jim’s deal with ABC and The Muppet Show pilot Sex and Violence. 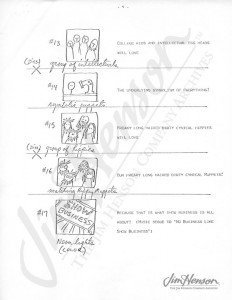 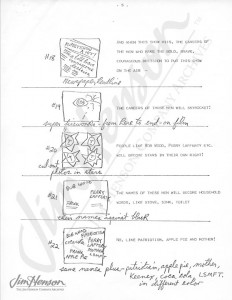