When Jim’s film Time Piece was nominated for an Oscar in 1966, it was satisfying recognition for a very personal project that stood outside the Muppet work he was known for on national television. The honor underlined the importance of the parallel career Jim pursued throughout the 1960s as an experimental filmmaker. Along with his Muppet guest appearances, commercials, and fairytale television specials, Jim was continuously working on a variety of live action, animated and theater concepts exploring human psychology, the relationship between images and music, new technologies and modern society. Though just 8 ½ minutes long, Time Piece is probably the best known of these projects and provides a window into Jim’s visual thinking at that time.

As the original press release stated, “Time Piece is the story of Everyman, frustrated by the typical tasks of a typical day.” Jim wrote, directed and starred in this comedic drama, presented in a non-linear fashion, filled with the light, humorous touches inherent in all of his work. The narrative is brought to life through an exploration of the possibilities of filmic stream-of-consciousness editing, epitomized by quick cuts that lead the viewer from a jungle sequence to a scene in a nightclub to a race through a cemetery. These scenes seem to have no logical connection but are linked by the presence of the main character, played by Jim, and a steady beat that underscores the action. There is no dialogue so no script was written, but Jim created an elaborate storyboard and painstakingly chose and timed the right sound for each image. Cut paper animation, just one of several animation techniques Jim had tried since getting his animation stand in 1959, bridge each scene to the next. Jim collaborated with Don Sebesky, a Jimmy Dean Show acquaintance, on the musical score that syncopates his vision, and he relied on the assistance of colleagues Jerry Juhl, Frank Oz, Donald Sahlin, and Diana Birkenfield to produce the film. Ted Nemeth, known for his camera work on the feature film, Finnigan’s Wake, was director of photography, and Jim enlisted his good friend Enid Cafritz to play the role of the wife.

While all of these people came together to complete the film, Jim’s colleagues are the first to say that Time Piece was completely Jim’s vision. “I don’t think there was ever a project that came more specifically [from Jim],” explains Jerry Juhl, “…he just went off by himself, and created that storyboard, and brought it in.” Despite spending a year of weekends and late nights working on Time Piece, Frank Oz remembers, “We didn’t know what was going on…it was all Jim’s idea. Whenever you talk about [the work on] Time Piece, no matter who did it, it’s got to be Jim and whoever, because it was such a personal piece to Jim.”

For the premiere of Time Piece on May 6, 1965, the Hensons rented the screening room at the Museum of Modern Art. The film was distributed theatrically with the feature film, A Man and A Woman, and ran for 18 months at the Paris Theater in New York. It was also sold to Canadian and Swedish television. Along with the Academy Award nomination for best short film, Time Piece won awards from the Venice and Oberhausen film festivals. In 1967, it won the Blue Ribbon Award at the American Film Festival sponsored by the Educational Film Library Association and the Golden Eagle Award from CINE. For years, Time Piece was mainstay in college film courses. 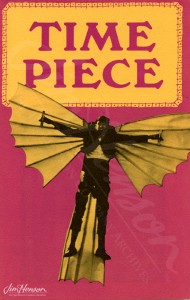 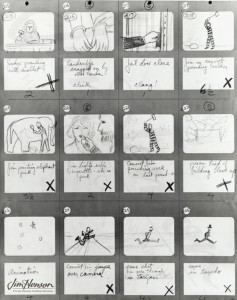 Page from the Time Piece storyboard drawn by Jim, 1964. 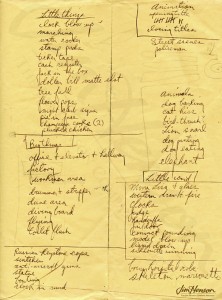 Notes by Jim for planning the Time Piece shoot, 1964.

Advertisements for Time Piece that appeared in Variety, 1965.