On a visit to the home of his Sesame Street colleague Jon Stone in Vermont, Jim began a tradition of skiing with his family. As Jon remembered, “We took [Jim] over to Stratton Mountain and got him outfitted, and I walked him over to the bunny hill. Later, Jim became an accomplished skier, applying himself to the task with his characteristic determination; but this morning, like every other first-day skier, he spent a lot of time on his backside (and frontside) until he was absolutely covered with snow. It was all over his clothes, in his beard, in his hair; and it’s this image that sticks in my memory: this skinny snowman coming at me down that gentle little hill, standing straight up, arms straight out to the sides, poles dangling. I remember telling him he looked like Christ of the Andes, and we both sat down in the snow, laughing.”

The Hensons generally went to Vermont to ski, most frequently to Stratton Mountain near the Stones’ house, and a couple times to Okemo and Killington. In 1975, when the Muppets’ appearance on a Julie Andrews special (taped in London) conflicted with the family’s Vermont plans, Andrews arranged for them to all ski at Gstaad in Switzerland. Another year, their cold-weather destination was Mt. Tremblant in Quebec. These ski trips were a real break from routine, and they gave Jim a chance to enjoy his family and spend some time relaxing in nature. And despite hurting his ankle during the 1974 Stratton trip, Jim and his family continued annual trips through the late 1980s. 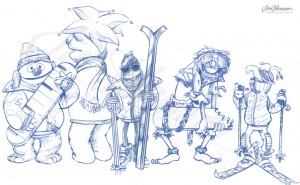 The Muppet gang ready to hit the slopes. 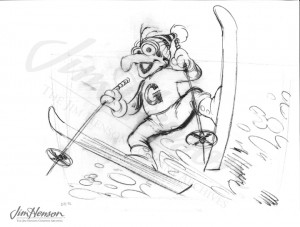