When Sesame Street launched its licensing efforts or “non-broadcast products” for Season 3, it was done with the utmost care. The division, headed up by former Random House editor and Sesame song writer and record producer Christopher Cerf, announced 38 products that November 1971 including books, puzzles, activity sets, a calendar, a record album, four playthings described as “simple teaching machines” and seven Muppet puppets. All of the products were designed around the show’s curriculum goals, but Cerf explained in the press release, “We believe that only if our books and playthings are amusing will they be purchased and used enough to have educational value.”

Much language in the release justified the Children’s Television Workshop’s expansion into the world of toys, citing the educational benefits of their products. In a speech made the same week as Jim’s visit to the Educational Toys division of the Topper Company, CTW Marketing Director Jeanette Neff said that they did not want to be seen as, “…exploiting this most precious and innocent of audiences, the children.” Having already tested easily defended books and records, they entered the toy market as a means of, “…extending the educational effect of the show.” She also emphasized that, “…all revenues from these and future commercial efforts are plowed back into Workshop educational projects,” as they are today.

Jim was pleased to see his characters transformed into items that children could interact with in person and involved himself in the design oversight of the products, particularly the Muppet puppets – plush Big Bird, Ernie, Bert, Oscar the Grouch and Cookie Monster puppets, and paper finger puppets and “Pop-Up” Muppets marketed by CTW’s publishing partners. The plush puppets, labeled as “A Jim Henson Muppet Puppet”, came in a box whose back looked like a television set. It could be cut out to make a puppet theater. Packed in with the toys was a brochure showing different ways to play with them and suggestions to parents about how to help kids get full educational value. Forty year later, Sesame Workshop continues to take into account the developmental needs of their very impressionable audiences when producing toys, dolls, books and other products. 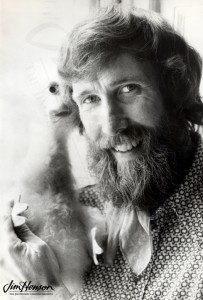 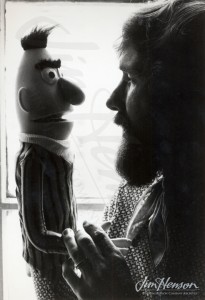 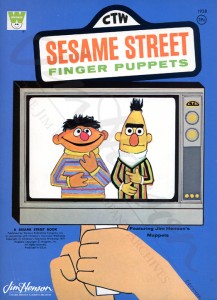 Sesame Street finger puppets, 1971. Inside, along with the character puppets, are alphabet and numbers puppets. 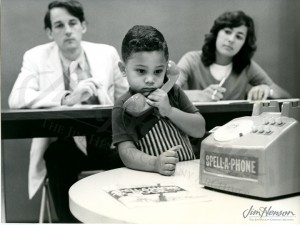 A child plays with a Sesame Street Spell-A-Phone while CTW researchers look on, 1971.