With the success of his Washington, DC show Sam and Friends, Jim was invited to perform during the US Department of Agriculture’s US Food Fair scheduled for the Town Hall in Hamburg, Germany from November 10-19, 1961. He and Jerry Juhl worked up a program for the stage in an area meant to evoke “Schlaraffenland,” the land of milk and honey in Grimm’s fairy tales. After visitors saw 400 years of kitchen design and enjoyed the entertainment, they went on to displays featuring American wheat, rice, soybeans, honey, poultry, fruit, non-fat dried milk, processed foods and leathers goods, ending with a meal in the American restaurant.

Barbara Witt of USDA special promotions wrote to Jim, “I thought you might want to know that spoofing of the exhibit itself would be entirely in order. Even mild sarcasms on content or Schlaraffenland itself could capitalize on the great American virtue of being able to laugh at ourselves.” Jim and Jerry planned alternating shows featuring Sam and Friends classics like “Old Black Magic”, “Glow Worm” and “I’ve Grown Accustomed to Your Face” combined with inventive new pieces. One featuring a blinking machine was based on an idea from hipster comedian Del Close. Another centered on a complicated mechanical puppet that allowed Jim and Jerry to perform a whole drill team and their unfortunate Captain simultaneously. And Omar, of the Sam and Friends gang, gamely made a complicated salad, speaking in a sort of German that would have made the Swedish Chef feel right at home. Not surprisingly, a fire extinguisher was needed at the end of the bit. 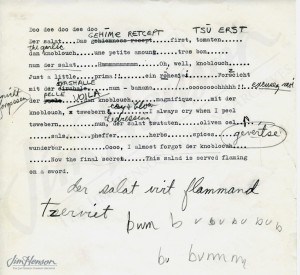 Script by Jim Henson and Jerry Juhl for Omar’s salad making demonstration at the US Food Fair in Hamburg, Germany. 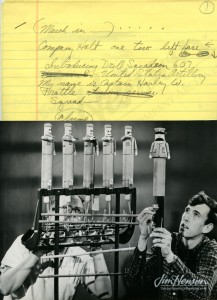 Script written by Jim Henson for Drill Team bit and photo of Jim and Jerry Juhl with the mechanical puppet, 1961. Photo by Del Ankers.