Even though the premiere of Sesame Street was still almost two weeks away, there was enough buzz about the show for Life Magazine to feature it in their October 31, 1969 issue. It’s no surprise that the image they chose highlighted the most colorful denizens of the street – the Muppets. The press was fascinated by the idea that the Children’s Television Workshop was taking a cue from Madison Avenue and making commercial-like pieces to sell letters and numbers. According to Life, Kermit’s test commercial, “…sold like mint-flavored toothpaste” to the test audience.

Sesame Street went on the air at a very controversial time for America.  The war in Viet Nam was raging, the generation gap was widening, and rock ‘n’ roll was here to stay. To place the show’s premiere firmly into the context of its time, one only needs to look at the front of that same issue of Life – the cover story was titled “Marijuana: At Least 12 Million Americans Have Now Tried It”. It seemed like a good time to harness the power of television and make learning fun. 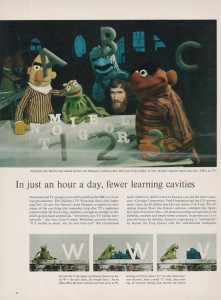 Feature on the upcoming premiere of Sesame Street on page 74 of Life Magazine, October 31, 1969.