Jack Wilkins, the owner of the Washington area coffee company named for his family, watched Jim and his Muppets in Sam and Friends on WRC-TV and was smitten. According to Roger Hefler, the company president, Wilkins was keenly interested in the field of advertising and studied it seriously. It was clear to him that the Muppets could be utilized creatively to sell coffee, and he asked Hefler to get in touch with Jim to discuss the possibility of making commercials. The Wilkin’s brand was locally popular, but there was tremendous competition from national brands like Maxwell House. Wilkins wanted to create advertising and promotions that would help their product stand out but within a relatively limited budget. The 8-second ID commercials were inexpensive, and Jim was hired to create characters and produce three spots. Featuring the company spokesman Wilkins and his beleaguered coffee-hating buddy Wontkins, the ads got an immediate response, both from consumers and from others in the industry. There was an uptick in sales and through their advertising agency, Belmont Ver Standig, Wilkin’s ordered more spots (eventually commissioning more than 200.)  Jack Wilkins was active in the National Coffee Association, and he soon heard from other coffee companies who wanted to do the same thing in their local markets.

With his interest in trends in advertising, Jack Wilkins was intrigued by the possibility of syndicating his commercials and offered to help Jim sell his services to clients in other territories. In return for a percentage of the earnings, Wilkins made connections for Jim with other coffee companies.  Wilkin’s also distributed various food items to hotels, restaurants and businesses and was a member of the Grocery Manufacturers of the United States. This gave Jim a broader range of potential clients – beyond coffee, Wilkins and Wontkins would, over the course of the next decade, sell bakery and dairy products, soft drinks, and even gasoline – all using the same scripts revised appropriately for the advertiser.

The Muppets got national exposure from these spots, and Jim established relationships with ad agencies around the country leading to a wide range of lucrative work. The commercials not only gave Jim the opportunity to experiment with characters and techniques, but they also supported his vast imagination and creative energy, providing him with the financial resources to pursue his vision in all directions.

The positive response to the Wilkins ads led to awards and recognition for Jim, even on the floor of the U.S. Senate. Read about it here.

See samples of commercials made for Wilkin’s coffee and some commercials for other clients featuring Wilkins and Wontkins, including some that were made in color. 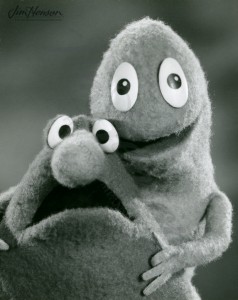 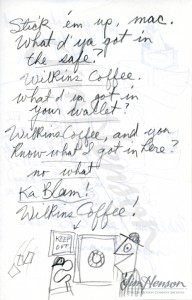 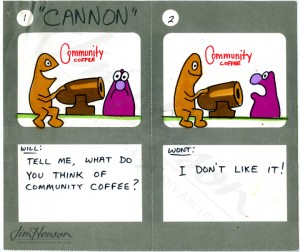 Jim’s storyboard for a color version of this Community Coffee ad made in 1969. The “Cannon” spot was one of his most popular and produced for at least 14 clients. 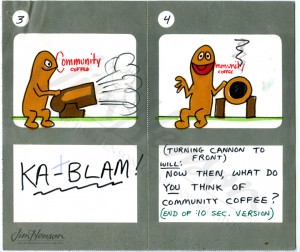 Jim’s storyboard for a color version of this Community Coffee ad made in 1969. The “Cannon” spot was one of his most popular and produced for at least 14 clients.

This entry was posted in 11-November '57, 1957, Commercials and tagged Coffee, Wilkins, Wontkins. Bookmark the permalink.