Jim and his team made numerous appearances on Mike Douglas’s popular daytime talk show which was broadcast from Philadelphia. Douglas was an engaging host and happy to showcase Jim’s latest project. A May 1968 appearance had featured some segments from Jim’s NBC Experiment in Television: Youth ’68. In July, Jim used the appearance to talk about another project, Hey Cinderella! Jim had been working on various fairy tale projects with his writing partner, Jerry Juhl, since their first attempts to sell Tales of The Tinkerdee in 1962. In 1965, Jim created puppets and performed on a version of Cinderella written and produced by Jon Stone and Tom Whedon that was a pilot for a series that did not sell. By 1968, that show had evolved into a television special, Hey Cinderella! under Jim’s direction that would get shot in October. In the meantime, Jim and Jerry Juhl were using the fairy tale characters they had created to tell stories on a variety of shows.

The listings in the Mike Douglas video archives date the appearance to August 13th so Jim may have pre-taped for later airing. During the show, Douglas and guest Peter Lawford chatted with Rowlf, and then, as he did in The Muppets on Puppets which was taped around the same time, Rowlf read the Cinderella story. Various Muppets acted out the tale which, in typical Muppet fashion, got mixed up with Hansel and Gretel and other fairy tales. While the appearance probably primed the audience for the longer television special, Hey Cinderella! did not air on American television until 1970.

Learn about other appearances on The Mike Douglas Show. 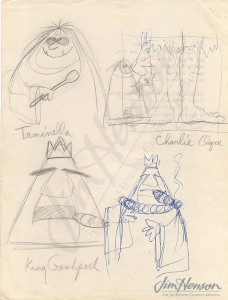 Jim’s rough character sketches for Tale of The Tinkerdee, 1962.