With all the exciting projects going on in the UK in 1979, Jim’s daughter Cheryl decided to take a gap year before starting college at Yale to work with her dad in London. She took several family trips to Scotland, Amsterdam, and various other spots and went alone with her father on a business trip to visit Oxford Scientific Films, exploring the possibility of using their effects technology on The Dark Crystal. With her artistic talents, Cheryl focused on working in The Dark Crystal workshop at the start of her stay, applying her skills to creature development. The following spring and summer, Cheryl worked in the workshop for The Muppet Show, again making puppets and also enjoying the various guest stars – especially Brooke Shields who was similar in age. Debbie Harry’s taping week was memorable for Cheryl as it ended with a big party at Harry’s home which happened to coincide with Cheryl’s 19th birthday.

Among the creatures that Cheryl built for The Dark Crystal was a complicated fiberglass rock with a large mouth that opened and closed. With an amphibian-like action, its long tongue could dart out and catch insects. See a video test of Cheryl and associate producer Duncan Kenworthy testing the puppet. 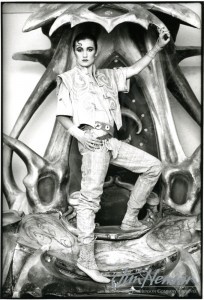 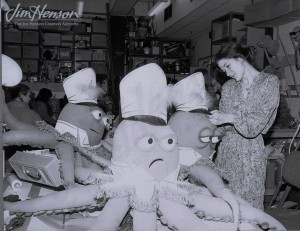 Cheryl Henson working on the James Coburn episode of The Muppet Show puppets in London, 1980.