During the first week of 1962, Jim was contacted by Carl Degen (formerly of WRC-TV in Washington) from the Protestant Radio and Television Center in Atlanta regarding the creation of a videotape presentation for The Broadcast and Films commission of The National Council of Churches. The PRTC hope that this pilot would develop into a series for the NCC making Sunday school songs and lessons more accessible and up-date-for children. Working with Jerry Juhl, Jim created storyboards and scripts featuring two children, Billy and Sue, and one monster, Sneegle. The threesome, performed by Jim, Jerry and Jim’s high school friend Bob Payne, was taped in Atlanta at the PRTC studio teaching about traffic safety. The NCC board reviewed the finished five-minute Billy, Sue and Sneegle programs that spring. While lauding the quality of the work, the board deemed the content unsuitable and decided not to pursue a series. The real problem was that the test audience loved the villain Sneegle who was encouraging bad behavior rather than Billy and Sue who always did the right thing.

At the time, Jim and Jerry Juhl were trying to develop a long form program to follow on the success of Jim’s five-minute show Sam and Friends. Using traditional fairy tale characters as a starting point, they created a place called Tinkerdee and a group of characters that included a bumbling King Goshposh, his prime minister, a mildly wicked witch Taminella Grinderfall, a princess, and a giant. Kermit played a minstrel narrator, presenting a story in verse to a tune that Jim wrote. Having already established a relationship with the PRTC earlier that year, Jim and his team (Jane Henson, Jerry Juhl, and Robin Reed) flew to Atlanta in June to film the pilot episode there. The resulting show was a charmer, but despite Jim’s best efforts, he did not find an interested broadcaster. Nothing was wasted, however – for one of the regular Muppet Today Show appearances on March 8, 1963, Jim and Jerry used the setting and characters for a sketch, “The Rulers of Tinkerdee.” Over the next few years, they continued to pursue various projects related to Tales of Tinkerdee. Learn about the development of one of them, Land of Tinkerdee in 1964.

See Jim’s puppets and storyboards from Billy, Sue and Sneegle and link to the video. 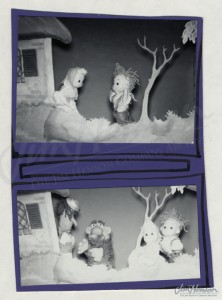 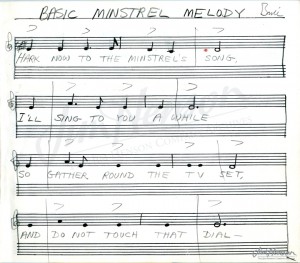 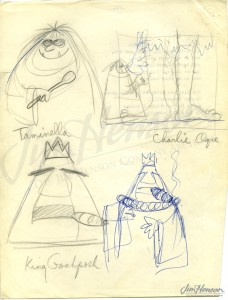