When Jim taped the Rita Moreno episode for the first season of The Muppet Show, he had already taped four others and the show was really starting to gel. It’s not surprising that he chose this fifth episode as the first to air in the New York television market when the show premiered that September 20th. Dr. Bob hit all his marks in “Veterinarian’s Hospital” (although the performers for Nurses Piggy and Janice were still in flux), Fozzie kept a telephone gag running, The Swedish Chef added to the chaos with misbehaving flapjacks, and Marvin Suggs debuted his celebrated “Lady of Spain” rendition with his Muppaphones. But it was the charm and humor of the guest star that really made the whole thing work.

Moreno, a celebrated star of stage and screen, is perhaps best known for her Oscar-winning turn as Anita in West Side Story. Her versatile talent demonstrated in that film which included singing, dancing, serious acting and the ability to do subtle comedy served her well on The Muppet Show. She did a slapstick “Apache Dance” with a beret-wearing partner, appeared on a panel with various characters (including a Guru that Jim had featured in his various Muppet Show proposals), and enjoyed a conversation with Kermit that was abruptly interrupted by Sweetums. Probably the most memorable part of the show was Moreno’s rendition of the song (earlier popularized by Peggy Lee) “Fever.” With a drum accompaniment, Moreno sang emotionally, swept up in Animal’s frenzied playing. Her performance did not go unnoticed, and she won an Emmy award for “outstanding continuing or single performance by a supporting actress in variety or music” – The Muppet Show’s first Emmy. In another connection, Moreno was also a featured actress in Children’s Television Workshop’s program The Electric Company. 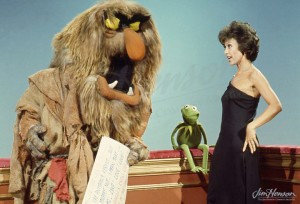 Rita Moreno with Sweetums and Kermit on The Muppet Show, 1976. 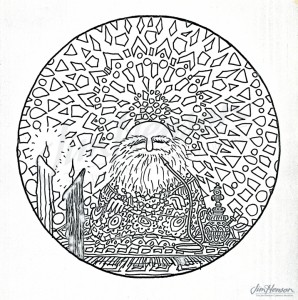 Jim’s idea for a Guru-like character featured in a Muppet Show proposal, 1972. 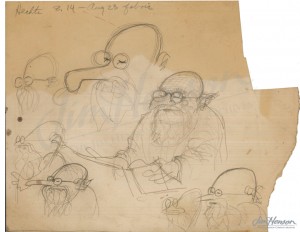 Jim’s idea for a Guru character from about 1960.