It’s not surprising that Kermit and Cookie Monster were invited to appear on the Emmy Award show in 1973. Despite its home on public television, Sesame Street had been knocking ‘em out of the park in awards competitions and won multiple Emmy Awards starting in 1970. The charm of the Muppets was obvious and it was terrific to be able to add interest to what can be a dull affair – a televised award show. At the time, both daytime and evening programming was honored in the same event. There were only two awards related to children’s programming – in the Outstanding Achievement in Children’s Programming category, there were awards for best program (CTW’s Sesame Street and The Electric Company were both nominated) and for individual achievement (along with writers and directors from both CTW shows, Sesame music director Joe Raposo was nominated.)

For that 25th anniversary award ceremony, talent gathered on both coasts on two evenings. The entertainment programming was celebrated at the Shubert Theater in Los Angeles and televised on ABC. Two nights later, the news and documentary programming people came together at the New York Hilton, and their show aired on CBS. On the first evening, Cookie Monster and Kermit were charged with presenting the children’s programming award (which could go to multiple winners). After some banter, Kermit opened the envelope, which Cookie Monster ate. Using a flash light to look down Cookie’s throat, Kermit announced that the winners were Sesame Street, The Electric Company and Zoom. According to Annette Duffy in The Hollywood Reporter, “The Emmy Awards had class this year because it refused to take itself too seriously.” Duffy continued, “Muppets Kermit the Frog (looking adorable in a tux) and the Cookie Monster presented awards for children’s programming, with [director Martin] Pasetta’s camera jiggling when the Cookie Monster gobbled up an Emmy statue, and continued his eating orgy by chomping on some of the award announcements.” 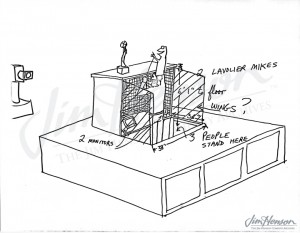 Jim’s sketch of his staging plan for his 1973 Emmy Award appearance.

This entry was posted in 05-May '73, 1973 and tagged Cookie Monster, Kermit, Muppets, Sesame Street. Bookmark the permalink.