Over the years, Jim was awarded numerous Emmy awards for his work on Sesame Street, The Muppet Show, several television specials, Muppet Babies, and The Jim Henson Hour. Posthumously, he was awarded the Governor’s Award from the New York Chapter of the National Academy of Television Arts and Sciences for Outstanding Lifetime Contribution to the Medium of Television. He appreciated all of the recognition that these represented and enjoyed participating in the proceedings with his industry peers, but perhaps the most memorable Emmy was his first in 1959.

Jim’s local Washington five-minute show Sam and Friends had gone on the air in Spring of 1955 and was immediately popular. Airing daily, often twice a day, it quickly gained an enthusiastic audience and won Jim press attention and several awards. The most significant was the Emmy for Best Local Entertainment of 1958. The ceremony at the Mayflower Hotel included dinner (fruit cocktail, terrapin soup, filet mignon, salad, and Mayflower ice cream pie with chocolate sauce) and the seating list included various senators, newsmen Walter Cronkite and David Brinkley, and guest of honor Vice President Richard Nixon. Ceremonies for the Los Angeles, Chicago and Baltimore chapters of the Academy of Television Arts and Sciences were held simultaneously with segments airing on NBC and the national awards split between them. Along with the local categories, the national awards for news categories were given in Washington. As the president of the chapter John Secondari noted in the program, “Our national product is news: this city makes it, we of the industry report it.”

Jim attended with his two performing partners, Bob Payne and Jane Nebel (whom Jim would marry three weeks later) along with his parents. There were three other nominees for Best Local Entertainment category: Bowl the Champ, the Milt Grant Show, and Traffic Court. 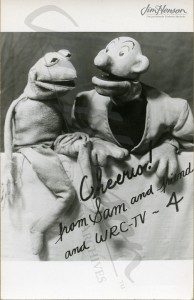 Jim created postcards to respond to all the fan mail his Sam and Friends show generated. 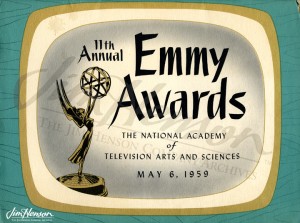 The program for the 1959 local Washington Emmy Awards event. 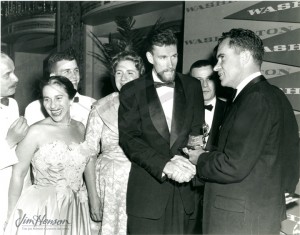