An insatiable appetite held great promise to Jim as an entertaining personality trait (as expertly demonstrated by both the Cookie Monster and Animal over the years.) Jim’s monsters ate everything in sight going back to the earliest days of Sam and Friends. In 1958, Yorick, the very first Muppet monster, performed to Ken Nordine’s well-known “word jazz” piece “Hunger is From,” subtly downing a late night snack while discussing the power of his appetite. Not so subtly, Yorick devoured Kermit in “I’ve Grown Accustomed to Your Face” numerous times.

For the Muppets’ last appearance on The Ed Sullivan Show, Jim and his team created a puppet called The Glutton which he performed with Frank Oz and Richard Hunt to an electronic music track written and performed by Joe Raposo. The flexible foam head was a departure in style and was, perhaps, a test run for the human characters in Jim’s Muppet Musicians of Bremen special the following year. On the program, the Glutton devoured a large meal, including the salt shaker, but was stymied by the last walnut who refused to be eaten and with some sort of magic, reduced the Glutton to a tiny version of himself. To end this bizarre bit in a typical Muppet manner, a full sized Glutton appeared and gobbled up the small one. 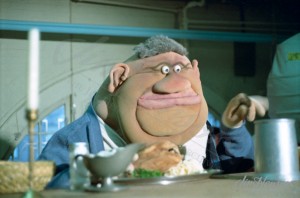 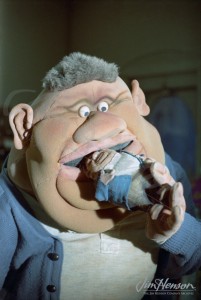