Having shot multiple short films for IBM over several years to enliven sales meetings, many featuring Rowlf in various comic scenarios, Jim and his colleague Jerry Juhl proposed a more ambitious approach to fulfill their 1969 contract. As big fans of television’s irreverent comedy half-hour Laugh-In, Jim and Jerry proposed spoofing it with “OPD Laugh-In”. (OPD was IBM-ese for Office Products Division.) The result was a 23-minute film consisting of short bits punctuated by Rowlf’s commentary (much like Rowen and Martin’s) to keep the action flowing. Like Laugh-In, the segments were brief, often just a sight gag, and quickly cut from one to the other. There was a groovy party scene with breaks in the music to tell a joke (transformed into the “At The Dance” segment on The Muppet Show,) and like most Laugh-In episodes, there was even a Richard Nixon joke. Some of the lines were read by IBM executives, and most of the jokes played on some aspect of an IBM product. Some of the segments simply provoked a reaction to an absurd situation. For example, one scene is described in the script: “Cut to girl at typewriter. She rolls in paper. Turns on machine. Starts typing. A piano sonata comes out of typewriter. She looks startled.” Clearly, Jim and Jerry knew the source material well, and while their efforts on this film were for a small audience, Laugh-In’s influence reverberated through other projects (like Sesame Street), and found a home in many a Muppet Show script seven years later. 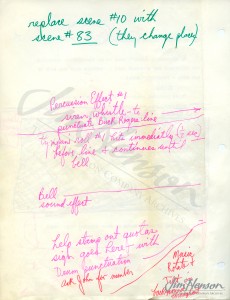 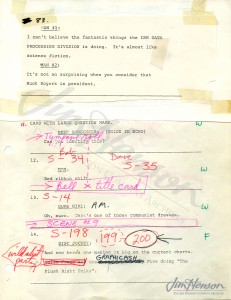