While Mia Farrow was the star on The Muppet Valentine Show, Jim’s first Muppet Show pilot, there were several memorable parts that featured just puppets and no humans. Two of these, which Jim taped on December 11, 1973, were the “Froggy Went Acourtin’” song with Kermit and the giant mouse and Kermit’s report from the Planet Koozebane.

Around 1965, Jim Henson started fooling around with an idea, probably for a variety show bit, called “Martian Landing”. He drew pages and pages of odd-shaped creatures, some with legs and some on wheels. His sketchbook from this period includes many images that seem to relate to aliens and other-planetary creatures. While Martians didn’t appear in any of the 1960s variety show bits, many of the pieces, such as “Sclrap Flyapp” and “Buggy Mugger”, took place in extra-terrestrial landscapes. A similar sort of landscape was used for the Muppet “Land of Gorch” bits created for Saturday Night Live in 1975/76. Eventually, Jim would bring together all of his alien ideas and produce a piece about the planet Koozebane for The Muppet Valentine Show which aired in 1974. On that show, and again on The Muppet Show, Kermit introduced the famous Koozebanian courtship ritual, the Galley Oh Hoop Hoop, resulting in a stage littered with Koozebanian pups. Along with the romantically linked male and female couple, other denizens of Koozebane that appeared on The Muppet Show included the Spooble, the Phoob, and George and Martha – talking hills. 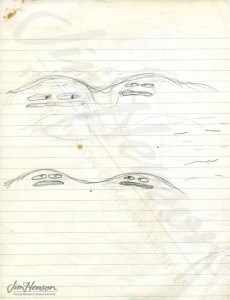 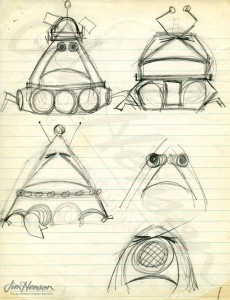 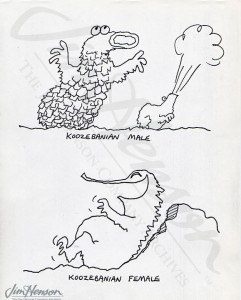 Jim’s sketches of the couple from the Planet Koozebane, 1973.