Jim always made a point of noting in his journal when his programs aired and especially when they ran a second time. That audiences (and networks) had enjoyed his work enough to ask for it a second time gratified Jim and confirmed his instincts about what viewers wanted. His Frog Prince special, aired as one of the “Tales from Muppetland” shows, held a special place in Jim’s heart given the prominent role played by Kermit and his species. Learn more about The Frog Prince. 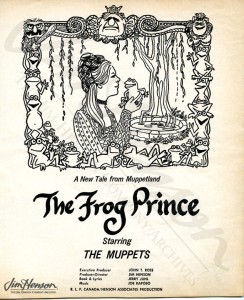 This entry was posted in 12-December '71, 1971, Frog Prince and tagged Kermit, Tales from Muppetland. Bookmark the permalink.