Jim’s explorations into a potential Broadway show featuring his characters generally featured Muppet-like puppets performing in a variety revue. In 1979, however, Jim decided to try a different direction. That summer, he received a note from choreographer Patricia Birch. She had come across a project she felt might interest Jim, Bodo, “a nice, bawdy medieval musical piece written by Hugh Wheeler (Night Music, Candide, Sweeney Todd) with music and lyrics by Anne Crosswell and Lee Pocriss.” Jim was intrigued and arranged to get a copy of the script. His busy schedule kept him from focusing on it until the start of December when he finally had a chance to read the story, as described several years later by New York Magazine, of, “…a humble but irrepressible 12th century goatherd [Bodo] who, to win the girl he loves, must triumph over a lecherous baron, a sanctimonious bishop, and other medieval evils.” On December 16th, Jim met Wheeler and Birch for a breakfast meeting before picking up his children Lisa and Brian near Boston (where they were in school) so they could return to London together for Christmas.

Jim was deep into development of The Dark Crystal, and discussed Bodo with his creative collaborator Brian Froud. Given Froud’s aesthetic predilection for old Europe, it made sense for Jim to ask Froud to try designing some characters for the stage show. As was his wont, Froud produced a pile of drawings of hooded peasants, hunchbacked women with distinctive noses, aproned vegetable vendors (with singing vegetables), animal peddlers, happy lepers, and sour-faced bishops. Many of the characters carried an animal or baby that could be brought to life by the actor costumed with a false arm while hiding his real arm in a puppet sleeve. Jim also experimented with these sorts of designs, imagining two drunks, one an actor and the other, a large puppet, being helped along and performed by the actor or a man with an elaborate walking stick that would talk back to him.

The legal department and various business people took over the discussions, working out contracts, credits, etc. and at the end of 1980, Jim resumed creative discussions with Wheeler. By the following April, he had a revised script. In the original, Bodo had been a swineherd, but in Wheeler’s note accompanying the new script, he noted, “Reluctant to compete with Miss Piggy, I have changed the pigs to goats. I hope you like them.” He also, apparently at Jim’s request, added a werewolf to the story. Jim was busy shooting The Dark Crystal and promoting The Great Muppet Caper, and development on Fraggle Rock had begun. Despite persuasive letters from legendary Broadway producer Emanuel Azenberg to Jim about the potential for a hit show, Jim decided to “drop Bodo” (as he wrote in his journal in June 1981) and move on. 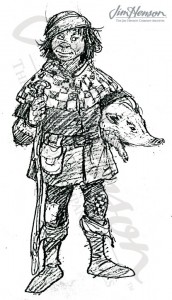 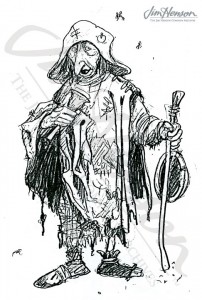 Brian Froud’s concept for the Leper in Bodo, 1980. 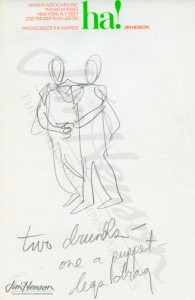 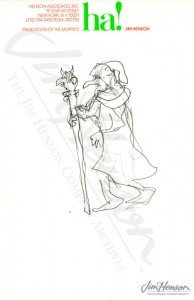 Jim’s concept for a man and his talking walking stick for Bodo, 1980 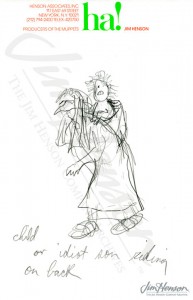 Jim’s concept for a woman carrying a child for Bodo, 1980.