Jim’s November 30, 1969 appearance on The Ed Sullivan Show marked the network debut of what is now considered the quintessential Muppet song, “Mahna Mahna”. The Piero Umiliani composition combined with Jim’s lyrics set the tone for the abstract and zany piece. Jim designed the big eyed Mahna Mahna puppet and his partners, the Snowths, and they were built by Don Sahlin and Caroly Wilcox. Their bright colors were typical of those enthusiastically used by Jim at the time to illustrate his show pitches and storyboards. The complimentary shapes, with the open and shut of the Snowths’ circular mouths reflecting the same shape and motion of Mahna Mahna’s eyes, demonstrated Sahlin’s masterful translation of Jim’s ideas into simple graphic elements.

Sesame Street debuted that month as well, and in the effort to have enough material to fill each episode, Jim mined his other work and adapted existing pieces. This is particularly true for several of his variety show bits like “Visual Thinking” and “Mahna Mahna”. But Jim was careful to keep his commercial television work separate from his educational/public television work and used different puppets to perform the same piece on episode 14 of Sesame Street. The Snowths’ chorus, sung by two little girls instead, changed a bit, too, switching out “ba-deep-a-dee-dee” for the better known “do-doo-do-do-doo.” The most polished version of “Mahna Mahna” was performed on season 1 of The Muppet Show.

Learn more about Jim’s appearances on The Ed Sullivan Show here and here. 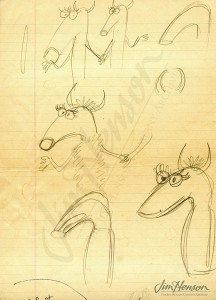 Jim’s design sketches for the Snowths. 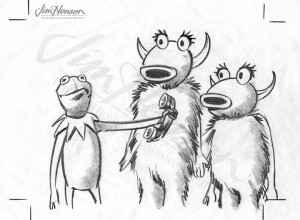 Kermit, standing in for Mahna Mahna, with some Snowths, in a concept for Muppet interstitials. 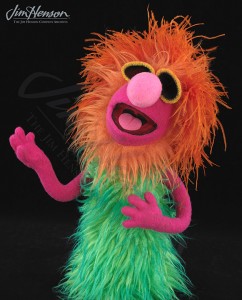 Mahna Mahna, ready for his close-up.