After Sesame Street launched and it was clear the show was a hit, the Children’s Television Workshop team began looking for other ways to connect with their audiences and extend the lessons taught on screen (not to mention creating a revenue stream to support the show). Starting during the second season, books, toys and records went into production featuring the lovable Muppets, all with educational merit. The success of Sesame Street’s first cast album in 1970 and the quantity of great music being written for the show encouraged the team to brainstorm about other types of records they might produce. In 1971, they decided on a 26-track album focusing on the alphabet.

Jim described the project on the album jacket: “The idea is very simple – a little song or skit about each of the twenty-six letters of the alphabet. A child listening to the record, and maybe smiling or singing along with it, can, at the same time, get acquainted with each letter. I thought it would be great if we could just give a child something to remember – a handle, or a few clues that would make learning to read just a little easier and a bit more fun.” He went on, “So I called Joe Raposo, Jeff Moss and Jerry Juhl together, and we divided up the letters of the alphabet. These are three extremely talented friends, who have proven themselves brilliant at creating material for children and Muppets and are all part of the Sesame Street team. After a great deal of writing and planning, we recorded with the vocal talents of Frank Oz, Carroll Spinney, Jerry Nelson and Fran Brill – our Sesame Street performers – one of the most talented group of puppeteers in the country. Many long hours were spent in the studio, and this is what we have to show for our efforts.”

Some Sesame classics appear on the album, like Joe Raposo’s “C Is For Cookie” and “Would You Like to Buy An O?” Others were written specifically for the release, like “Just Because” by Jim and Jerry Juhl for the letter Y and “Sammy the Snake” by Jeff Moss. The original 1971 album jacket opened up to reveal a blackboard design and was packaged with chalk and punch-out alphabet letters, encouraging listeners to practice writing while listening to the songs. The 1976 re-release dispensed with the lumpy chalk and instead had little drawings illustrating words that started with each letter.

One song on the album celebrated the camaraderie of the team: “J Friends” by Jeff Moss. Watch and hear about Joe [Raposo], Jane [Henson], Jim [Henson], and Joan [Ganz Cooney, founder of Children’s Television Workshop]. Somehow, Jon [Stone, producer and director] and Jeff [Moss, writer and composer] got left out. 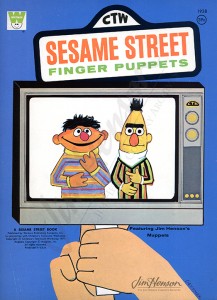