When Jim completed production on his short film Time Piece on early 1965, he was eager to show his work. He invited his friends and colleagues to a private screening on May 6th at the Museum of Modern Art. He sent prints of the film to potential distributors, underwriters, and clients. Copies went to the U.S. Steel Corporation’s Applied Research Laboratory. The audio-visual manager there, Bill Smith, wrote Jim that he hosted, “many showings both within and outside United States Steel,” and that, “In all areas it received favorable comments.” He then offered to show it at the Industrial Audio-Visual Association meeting in Boston, and Jim readily agreed. Through the William Morris Agency, he sent a print to Eastman Kodak and got a very enthusiastic letter in response indicating that everyone there, from the Chairman of the Board to an array of Assistant Vice Presidents (and, “the House Intellectual”), thought that “TIME PIECE was SENSATIONAL!” Time Piece would become a mainstay in film schools, and as early as December 1965, before Jim even had theatrical distribution in place, a lecturer at Queens College wrote to Jim that his Cinema class had seen Time Piece and thoroughly enjoyed it.

Jim submitted the film to festivals in Germany and Italy where it got much recognition. But the notification that Time Piece had been nominated in 1966 for an Academy Award in the live-action short film category was perhaps the most satisfying honor Jim received. Between shows on his Jimmy Dean tour, Jim and his wife Jane went out to Los Angeles for the ceremony. The competition included films called Fortress of Peace, Skaterdater, and Snow, and the winner was a French film called Le Poulet (The Chicken). It was an honor to be nominated, and Jim and Jane, who had worked almost exclusively in television up until that point, enjoyed sharing the celebration with members of the film industry. 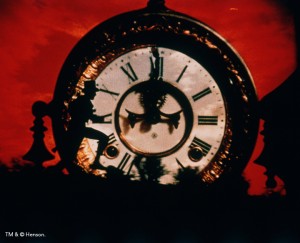 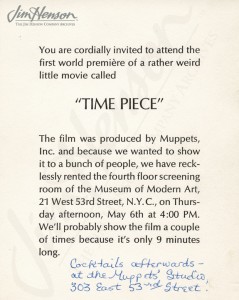 The invitation to the first screening of Time Piece held at the Museum of Modern Art.