Jim and his colleagues made two appearances on The Dick Cavett Show. The first time, on Thanksgiving in 1971, Dick Cavett’s entire ninety-minute show was devoted to the Muppet group performing just about everything in their repertoire. A family-friendly way to end the holiday, audiences tuned in at 11:30 PM to see Kermit, Big Bird, Mahna Mahna, clips from Time Piece and Youth ’68, Big Bossman, the changing faces of the Southern Colonel, and footage of Jim’s Sesame Street animated counting films.

When Jim was invited back to Cavett’s show in 1973, he needed something new. He enjoyed all types of music and, as Kermit, had played both the mandolin and the banjo over the years. Performer Jerry Nelson was an accomplished guitarist so creating a small band seemed like a fun challenge. Jim’s notes called the group a “rock trio” but the resulting band became known as the Country Trio. Jim asked designer Bonnie Erickson to create three caricature puppets resembling himself, Frank Oz, and Jerry Nelson. Experimenting with their facial hairstyles and choosing appropriate costumes, Bonnie sketched and carved three distinctive-looking musicians that resembled their respective performers. Channeling Jim’s country roots, the trio performed the traditional song “Mama Don’t ’Low” with a rock ’n’ roll beat, hinting at The Electric Mayhem and other Muppet bands to come. 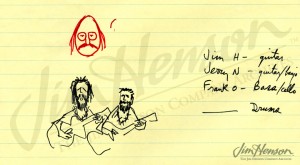 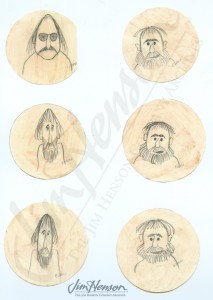 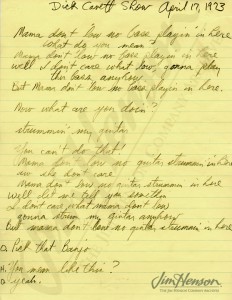 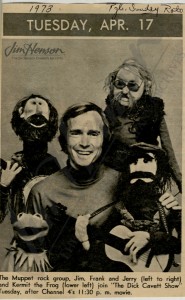