Jim loved his time in the studio with his fellow Sesame Street performers. There was no greater joy than singing and joking with his friends while working with his long-time colleague Jon Stone who directed the Muppet inserts. Performing Ernie to Frank Oz’s Bert gave Jim a chance to razz his long-time collaborator through their characters, and appearing as Guy Smiley, the over-the-top game show host, Jim could let go and give a loud-mouthed, very silly performance. 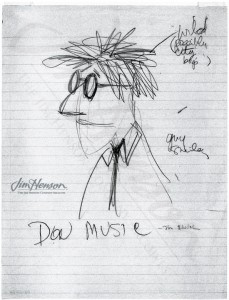 Jim’s design for Don Music, using the same Anything puppet as Guy Smiley. 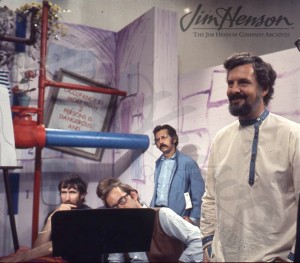 Jim, Frank Oz, and Don Sahlin with Jon Stone on the set of a Sesame Street Muppet insert.