In late 1976, Muppet Show head writer Jerry Juhl wrote an outline for a television special unlike anything the Henson team had done before. For the first time, he and Jim sought to produce a show based not on their original ideas or on classic fairy tales from the public domain, but on an existing storybook. They were charmed by Russell and Lillian Hoban’s story and illustrations in their book, Emmet Otter’s Jug-band Christmas, and acquired the television rights. Jerry wrote the script, and Jim asked Paul Williams, recently a Muppet Show guest star, to write the original music. Casting from his core performing group, with Jerry Nelson in the title role, and recording the music in Los Angeles, Jim was ready to start shooting in a Toronto studio on March 13-25, 1977.

The charming show, set in a gentle, old fashioned world with anthropomorphic animals, tells an O. Henry-esque story of a mother and son otter sacrificing to give each other a special Christmas. Moments of humor combine with touching ballads and rousing jug-band songs to create a warm, entertaining show. While the beautiful hand puppets and marionettes underscored the Henson workshop’s well documented skill, there were many elements that anticipated what was to come from Jim’s team. For the first time, animatronic radio controlled puppets were used and served as a sort of test for the innovations of The Dark Crystal and Fraggle Rock. While it was recognizable as distinctly rural America, Emmet’s world had to be created as a whole, much like in Jim’s fantasy work and for the Fraggles. And Kermit, narrator in the original version, rode a bicycle for the very first time.

Emmet Otter’s Jug-band Christmas aired for the first time on Canada’s CBC in 1977. In the following two Decembers, it aired on HBO, and in 1980, it aired on ABC. Re-runs of the show made it a much-loved holiday tradition for many families. It was awarded a Gabriel and an Ace award and was nominated for four Emmy awards. The critics loved it – Peter Warner wrote in The Hollywood Reporter, it “…is a triumph of story, song, and charming execution.”

Learn more about Paul Williams and his appearances with The Muppets. 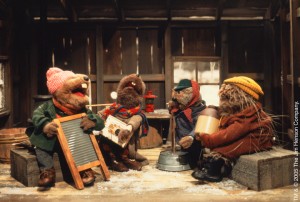 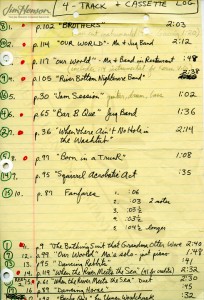 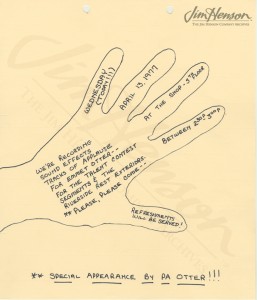 Invitation to the Henson staff to join a sound effects recording session for Emmet Otter, 1977.