When Jim moved to New York in 1963 (with his wife Jane, his daughters Lisa and Cheryl, and his colleague Jerry Juhl), he set up an office on East 53rd Street. Along with the main office/sitting room in the back and the workshop on the street side, there was a small area for a secretary. In the years that followed, several women occupied that desk, typing invoices, tracking down commercial payments, reporting appearances to the unions, and arranging for film reels to be shipped around the country. The Muppet secretaries, as they are referred to in Jim’s 1966 presentation film for the Wilson’s Meat Company, also assisted with shoots, puppet construction, served as a test audience, and in general, helped out where needed.

The Carroll that Jim mentioned in 1965 is Carroll Conroy, hired in August 1963, the same month that Frank Oz joined Jim, Jerry and Don Sahlin at Muppets Inc. Along with her other duties, Conroy was credited on Jim’s short Time Piece for the costumes and makeup. She was followed by Jay Campbell, Terry Tanner, and Bonny Santello. By the end of the decade, when Shelly Herman joined the staff, the company had grown to include additional performers, a producer, Diana Birkenfield, and more puppet builders. They had outgrown their 53rd Street office in late 1968, moving to East 67th Street, and the numbers of personnel continued to increase. But Jim remained engaged with his staff, even on the clerical level, and noted their comings and goings in his journal throughout his career.

Jim’s 1966 presentation film for the Wilson’s Meat Company showed how the Muppet secretaries (some played by actresses) helped out with a commercial shoot. 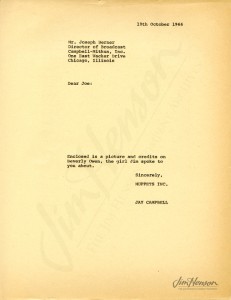 Carbon copy of typical piece of Muppet secretary correspondence – this letter relates to the talent for a La Choy Chow Mein commercial. 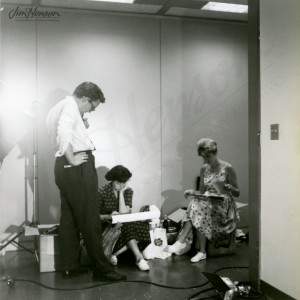 Behind the scenes on the Time Piece shoot: Jerry Juhl, Diana Birkenfield and Carroll Conroy, 1964.