For Jim and his crew, the start of 1968 involved a lot of travel on behalf of the Getty Oil Company. After shooting a humorous film for their presentation on January 10th, they hit the road, Rowlf in tow. They spent January 23-26 in Atlantic City, February 1st back in New York at the Hilton, February 5th in Boston, and then finished on the 8th in Philadelphia. Back in Manhattan, they prepared a bit for a February 26th Ed Sullivan Show appearance, appropriately titled “Business Business”, and then Jim turned his attention to his NBC Experiment in Television, Youth ’68, which was scheduled to air in late April. 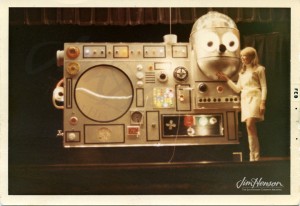 Live appearance of a Muppet Machine at an IBM meeting, late 1960s.