By the time he stepped behind Johnny Carson’s desk to guest host The Tonight Show in 1979, Kermit was a seasoned veteran of late night and had lots of experience as the host of his own show. It was an honor to be tapped for the job and a nice opportunity to showcase some of the stars who had appeared on The Muppet Show.

Vincent Price appeared in the first season of The Muppet Show and was a perfect foil for the many monsters that hung around the theater, especially Uncle Deadly who debuted on that episode. Price was not just a versatile actor (best known for his horror movies) but also an art collector, gourmet cook, and denizen of Hollywood Squares. He and Kermit had a lot to discuss. Bernadette Peters, the Broadway star, had developed a special friendship with Kermit’s nephew Robin and was clearly delighted to have the chance to reprise their duet “Just One Person”. When he was on The Muppet Show, Leo Sayer, a pop singer known for his easy stage presence and sense of humor but perhaps better remembered for his impressive hair style, sang his disco classic “You Make Me Feel Like Dancing” and, with various woodland animals, his hit song “When I Need You”. Miss Piggy, who was feuding with Annie Sue at the time, finally got her chance to perform with him on The Tonight Show, adding her vocal talents to another version of “When I Need You.” The veterinarian who rounded out the guest list was Dr. Charles Fox, and Kermit finished the evening with a soulful rendition of “Bein’ Green”.

The reaction to the show was favorable and reviewers took the opportunity to discuss it in the context of Johnny Carson’s contract negotiations. TIME magazine asked, “…with NBC President Fred Silverman urging Carson to spruce up the show for ratings’ sake and speculation that Carson might decide to leave it instead, could “The Mighty Kermit Players” be waiting in the wings?” The Daily Intelligencer’s Joan Bastel went further saying, “It has become obvious that one of Carson’s guest hosts about a month ago was so delightful, so well received and so accommodating to the network officials and crew of the talk show that Carson felt he was shown up.” She goes on to say, “Long-time Kermit fans are not surprised by this golden opportunity our little friend has before him. His world-wide popularity is without question.” Bastel felt the late-night format was ideal for Miss Piggy as she, “…would not be forced to stifle her sensuousness any longer.” Perhaps jumping the gun a little, she said “When Kermit comes to The Tonight Show, his sidekicks will no doubt accompany him. And it will be good for all of them.” She concluded, “Miss Piggy will kiss her frog and turn him into the prince of late-night television.”

To learn more about earlier appearances on The Tonight Show, see January 13, 1966. 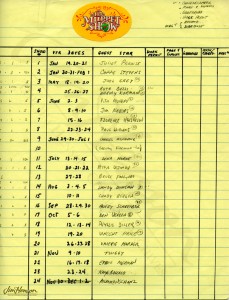 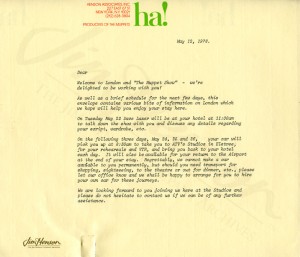 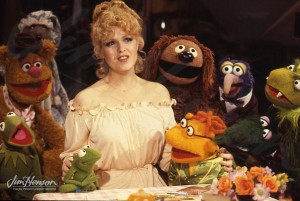 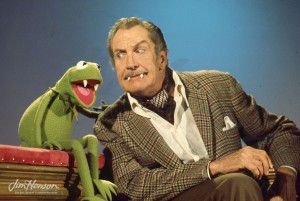 Vincent Price and Kermit in a Muppet Show publicity still, 1976.