By the time Jerry Juhl started working on the script of The Muppet Movie, he had been collaborating with Jim for almost 17 years and was trusted to give voice to the essence of the Muppets. When Jerry came east from California in 1961, his comic sensibility and world view meshed with Jim’s easily, giving the characters their personalities and heart. Though from opposite coasts, Jim and Jerry had similar tastes and influences; both were fans of Stan Freberg, Ernie Kovacs, and Rocky and Bullwinkle. Underneath the zaniness, they shared a sense of decency and desire for their characters to connect in a real way with the audience. While entertainment was the paramount goal, it needed a deep foundation based on the characters and their relationships. Jerry once wrote, “When comedy is written well, the writer first writes characters who have attitudes, passions, obsessions, derangements, faults, nobility, and, in short, humanity. These things should be funny in and of themselves. Then, when everything else is done, he tries to find some jokes to sprinkle in – like raisins in the cake.”

Jack Burns, head writer for the first season of The Muppet Show, wrote the first two drafts of The Muppet Movie script based on an outline he developed with Jim in 1977. After long years of collaboration with Jerry on projects ranging from Muppet appearances on The Ed Sullivan Show to the surrealistic drama The Cube, Jim knew how important it was for Jerry to contribute his voice to the script, too. He jumped in and reworked the structure and the script. It made for an incredibly busy spring, but Jerry was excited by the possibilities of the big screen. “It certainly opened us up into a whole new world that allowed us a whole emotional range that was wonderful to work with,” he explained. The combination of Jack Burns’ comedy, Jerry Juhl’s sense for the characters and their relationships, and Jim’s overall vision made for a compelling screenplay. The resulting film was a hit when it opened in 1979 and remains a classic today. 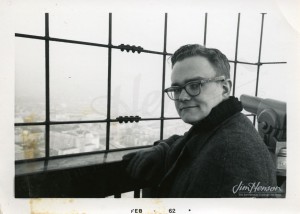 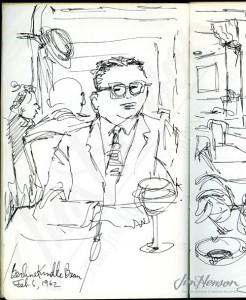 Jim’s sketch of Jerry Juhl on their USIA trip to Berlin, 1962. 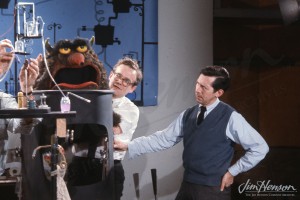 Jerry Juhl and Don Sahlin on the set of a Pak-Nit industrial film, 1965. 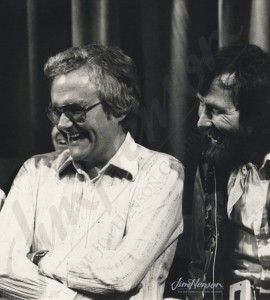 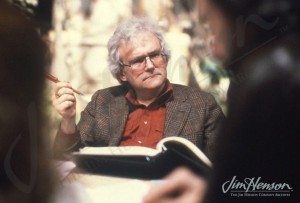