When Jim went to DC in March 1977, it was not the first time he was honored by the Art Directors Club of Metropolitan Washington. Back in 1959, three of Jim’s Wilkins and Wontkins commercials were nominated in the Design of a Complete Unit (Television Art) category, and one was awarded the Gold Medal. Jim would have appreciated the renewed attention but was probably more excited about his meeting to discuss the planning for 1980 activities of UNIMA, the international puppetry organization.

Jim had been instrumental in establishing an American chapter of the Union Internationale de la Marionnette in 1966 and was working toward its eventual incorporation in 1979. The 1980 UNIMA Congress was to be held in Washington, the first time outside of Europe. According to the UNIMA-USA website, Jim and fellow puppeteer Nancy Staub, “…had a major role in organizing this major landmark in American Puppetry presented by UNIMA-USA and the Puppeteers of America.” The opening gala was held at The Kennedy Center, and it featured the royalty of television puppetry: Burr Tillstrom, Bil Baird, Shari Lewis, and the Muppets. The event was taped by Pittsburgh Pubic Television WQED and edited into a television special, Here Come The Puppets. Narrated by Jim and Kermit, it gave American television audiences access to a little-known area of the entertainment arts, both on screen and live in theaters. 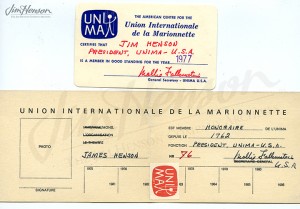 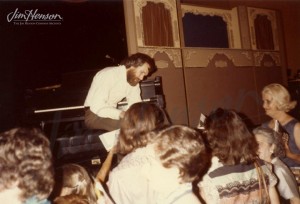 Jim signing autographs at the 1980 UNIMA Congress in Washington, DC.