In early June 1969, Jim made an arrangement with Eleanor Willett at Autolycus (a talent, marketing or event planning agency in New York), to create comic relief for the sales team of the Thom McAn shoe company at their annual meeting. The show that he performed over two days helped him to further develop what he started with IBM in the realm of Muppet Meeting Films, laying the groundwork for an array of pieces that would work in any corporate setting.

For the Worcester event on the 25th & 26th, Jim planned several elements that would alternate with serious presentations from the Thom McAn executive team. The Muppet components were a combination of live performance (Jim assisted by Danny Seagren and production assistant Eric Jenkins) and pre-taped still and moving images with a recorded soundtrack. The music came mostly from the CBS Records EZ Cue library and was licensed for this purpose, and additional music was provided by Joe Raposo. Rowlf was the master of ceremonies and narrated several segments. He started with a rousing reading of the Thom McAn Creed. It is unclear if this was an actual printed set of guidelines, advising the salesmen to push for extra sales of laces, polish, hosiery and panty hose and not to smoke on the selling floor, but Rowlf was certainly embellishing when he advised against mentioning poor sales in the last quarter of 1968 to executive Roy Fogas and, perhaps, when he said, “do not peek, even in the mirror” when serving “teen-age customers with micro-miniskirts”. He concluded with a song: “Thom McAn, we love your credo, but we love the money even more!”

A more involved element featured the presentation of a slide show titled “How To Sell Men’s Shoes To A Woman”. Over images of a store interior with a salesman and a pair of customers (a human, Harold, and his wife, a Muppet monster), Rowlf described the interaction, and the prerecorded voices of the participants demonstrated a successful sales technique. The monster wife, however, was an extremely difficult customer and, in the end, dragged her husband off to Florsheim’s. Rowlf was philosophical, “After all,” he said, “you may have lost a sale but think what Florsheim is about to gain!” Later Rowlf played his flashy electric guitar and showed footage of Kermit, in the guise of the “world’s leading authority on selling fuzzy slippers,” getting harassed by a monster as he imparted his ninety-seven secrets to selling to the crowd. The monster helped him keep it short. Finally, Rowlf finished the show with a customized version of the Stan Freberg song, “Money”. Typically, Jim was making fun of the capitalistic ambitions of the people that hired him. Or, as a dog like Rowlf might put it, biting the hand that fed him.

Learn about other Muppet meeting films. 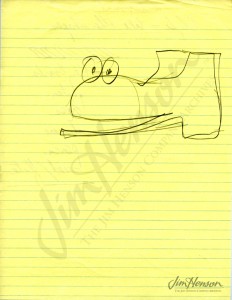 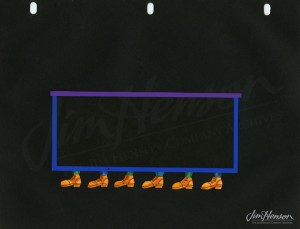