David Lazer, the executive producer of The Muppet Show and Jim’s feature films, was a long-time collaborator dating back to Dave’s role as audio-visual manager for IBM in the mid-1960s. He joined the company in 1975 and was indispensable to Jim throughout the years. After the success of The Muppet Movie in 1979 and with The Great Muppet Caper in the works, Jim and Dave were firmly part of the film community and joined the crowd at the Cannes Film Festival. Despite being experienced movie makers, Jim and Dave were still delighted to be there and enjoyed the glitter and excitement.

Many years later, Dave remembered the trip he took with his friend: “What a thrill. Two days at the Cannes Film Festival. Lord Grade’s office chartered a flight to take Jim and me to France. Two fabulous suites awaited us, a detailed itinerary as well as a major dinner reservation. The following day at the festival was loaded with special events and screenings. Our movies and The Muppet Show were at the peak of their popularity around the world and Jim was showered with praise and adoration. The evening ended with a party on a private yacht loaded with stars and movers and shakers. We left the yacht at one o’clock in the morning and walked along the dock. Even the moon seemed to do a shimmer dance on the water just for Jim. He was mesmerized by the beauty, the serenity, and the nurturing power of Nature. None of the glitz of Cannes or all the accolades he received had this effect on him.” 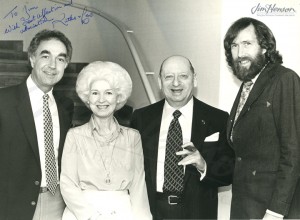