The two commercials for the Frito-Lay product Munchos came at the end of a twelve-year advertising marathon during which Jim made hundreds of spots for dozens of clients. Long form for national television and made with the renowned Young & Rubicam agency, the Munchos ads represented a potential start of an even larger advertising presence for Jim’s characters. This was not to be, however, due to Jim’s commitment to his new project, Sesame Street.

Frito-Lay was very happy with the 1969 spots and hoped to continue the campaign the following year. Their legal department approached Jim’s agent, Bernie Brillstein, and made a proposal, acknowledging that Brillstein had, “…advised that Jim Henson, in an effort to avoid commercialization of Sesame Street, and also because of a demanding schedule, is not interested in making new commercials.” They suggested that perhaps new commercials could be made by another studio under Jim’s oversight, and further, that their characters, Fred and Arnold the Munching Monster, were made specifically for them and would therefore not be confused with Sesame Street characters. After much discussion, Jim’s lawyer crafted a response that underlined Jim’s high regard for Young & Rubicam while also turning them down. Jim was determined to leave advertising behind to protect the young viewers of Sesame Street, and he would not allow someone else to produce work with his characters. What went unsaid was that Arnold the Munching Monster had a close cousin preparing for his debut on public television so the possibility for confusion was something to consider.

See the Munchos Monster at work. 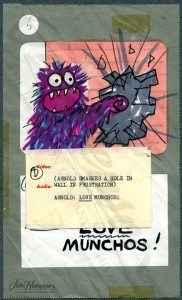