Jim’s first primetime network Muppet special, The Muppet Valentine Show, was scheduled to air on January 30, 1974. Keeping in mind its potential impact as a pilot for a series, Jim was eager to promote the show. After a week of editing and a January 12th party at his home during which he screened the special, Jim departed for a two week tour, making appearances on television programs around the country. His itinerary included Florida, Washington, Philadelphia, Ohio, and finished in Albuquerque. The effort paid off – the show got big audiences and by mid-March, Jim was meeting with Martin Starger, President of ABC, to discuss a series. 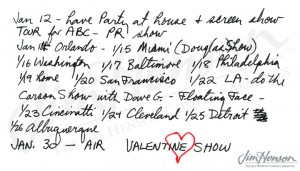 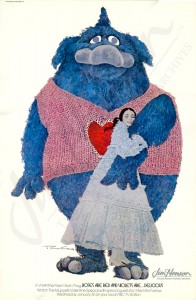 This entry was posted in 01-January '74, 1974, Muppet Specials and tagged Martin Starger, Muppets, The Muppet Valentine Show. Bookmark the permalink.