Jim Henson came from a musical family that enjoyed sharing harmonies around his mother’s organ and piano. Jane Henson’s parents’ home also featured a piano and it was used for dance music during Jim and Jane’s wedding in 1959. When the Hensons bought their home in Greenwich, CT in 1964, getting a nice piano would have been a priority and an event worth noting.

Jim was not classically trained, but he could play serviceably. He wrote music for some of his projects, including his 1962 pilot The Tales of The Tinkerdee, and collaborated with musicians and composers, often sitting alongside them on the piano bench while they created a music track. Jim enjoyed sharing the songs by Walt Kelly (with Norman Monath) from The Songs of Pogo book with his family, and together they sang from A.A. Milne’s Pooh Songbook. Some of these favorites made their way onto The Muppet Show – Kermit’s nephew Robin memorably sang Milne’s “Halfway Down the Stairs” in the first season. Jim’s musical alter-ego Rowlf tickled the ivories as he sang Milne’s “Cottleston Pie” and Kelly’s “Old Dog Trey”. The Kelly humor seemed to lend itself well to the extra two minute comic spots needed for UK broadcasts, and to fill that time for episode 22, Miss Mousie sang Kelly’s “Don’t Sugar Me” to the cantankerous Statler and Waldorf. There seemed to be little risk that they would be too sweet to her! 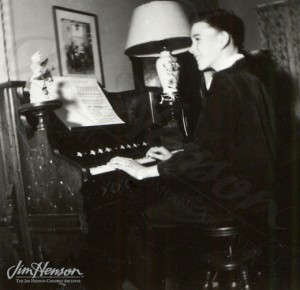 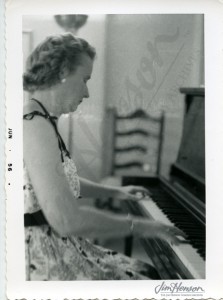 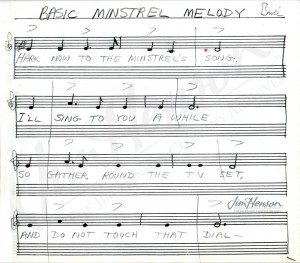 Jim’s handwritten composition for Tales of The Tinkerdee, 1962. 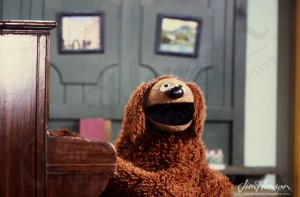 Rowlf at the piano on The Muppet Show.