Having spent time in London on several occasions in the early 1970s for television specials hosted by Tom Jones and Julie Andrews, Jim was comfortable there. Beginning in 1976 when The Muppet Show began shooting at ATV’s Elstree Studios in the Borehamwood suburb, Jim was happy to make London his home for several months each year until the end of his life. At first, he stayed in hotels or rented flats for his temporary residencies, but by 1979 he was in the market for a house and bought one in the Hampstead neighborhood of Camden at the end of that year.

The Frognal Gardens house, rented perhaps because of the street’s amphibian name, was Jim’s third London home, used during The Muppet Show season two. During season one, which was shot in two blocks of time the year before, Jim lived in Harley Gardens and then Clabon Mews, both in Kensington. It was the Frognal Gardens stay that gave Jim the opportunity to get to know the Camden area. For season three, he stayed at a hotel in nearby Regents Park and then used a friend’s place in Camden, finally buying his own house in Hampstead at 50 Downshire Hill. With the start of Dark Crystal development and the need for workshop space, Jim purchased an old post office across the street at 1b Downshire Hill which became the headquarters for Jim Henson’s Creature Shop.

A charming neighborhood of historic houses and hilly streets, Hampstead was a pleasant place to live and work. For Jim, it had an extra perk – the lovely park known as the Hampstead Heath. When he needed a break, Jim could wander the paths, alone or with friends, enjoying the trees and the views and generally recharging his creative energy. When his good friend and colleague Don Sahlin died in 1978, Jim arranged for a bench to be installed in his memory and often went there to sit and reflect. Jocelyn Stevenson, co-creater of Fraggle Rock, credits coming up with the name “Doozers” to a visit there with Jim. In 1990 after his passing, Jim’s name was added to the bench.

Click here, for a walking tour of Jim Henson’s Hampstead. 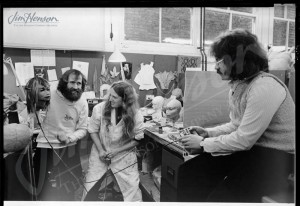 Jim with Wendy Midener and Brian Froud at the Creature Shop at 1b Downshire Hill, Hampstead, c. 1980. 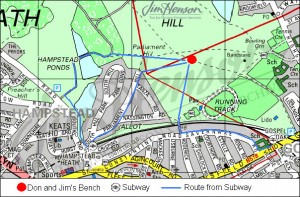 A map showing the location of the bench placed in memory of Don Sahlin on the Hampstead Heath.