The Jim Henson Company to Develop All-of-a-Kind Family, a New Live Action One-Hour Epic Prime Time Drama Based on the Acclaimed Series of Books about the Jewish American Immigrant Experience 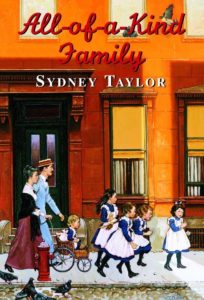 Hollywood, CA (September 21, 2022) – The Jim Henson Company, an established leader in innovation and family entertainment, is developing All-of-a-Kind Family, a live action one-hour drama series for prime time about a hardworking Jewish family in Manhattan’s bustling Lower East Side in 1911, navigating both the awesome wonders and the brutal trials of being first generation immigrants. Seasoned television writer Jordana Lewis Jaffe is attached to develop the project and as showrunner, to bring to life the beloved stories from the acclaimed collection of books by author Sydney Taylor.

Published in 1951, All-of-a-Kind Family was the first book where Jewish American children could see themselves and their experiences reflected in an authentic way. Taylor (1904-1978), who drew on her own family’s experiences, would go on to write four additional books in the series, which has notably never been out of print and has sold millions of copies globally. Taylor received the Charles W. Follett Award, the William Allen White Award, and was honored by The American Library Association with the creation of the annual Sydney Taylor Book Award.

“My grandfather and his family immigrated from Hungary to New York City 1922, during the same era as the All-of-a-Kind Family books. As a young Jewish girl growing up in America, I saw myself and my sister in these rich, detailed stories, and our Jewish heritage celebrated,” said Halle Stanford, President of Television for The Jim Henson Company. “I believe every family that watches this exciting and dramatic series will feel an authentic connection to their own lineage as well as to the struggles and joys of every immigrant or refugee family today. It will be the type of Henson family series we believe audiences are craving: epic, sentimental, topical, hopeful, funny and joyful.“

“I cherished the All-of-a-Kind Family books as a kid, introduced them to my own children as a way of connecting to their ancestors, and am thrilled to bring this story – and its history, culture, and characters – to the screen,” said Jordana Lewis Jaffe.

All-of-a-Kind Family is a Jim Henson Company production. The series will be executive produced by The Jim Henson Company’s Lisa Henson and Halle Stanford, as well as Jordana Lewis Jaffe and Gregory Phelan. Rachel Manija Brown will co-produce.