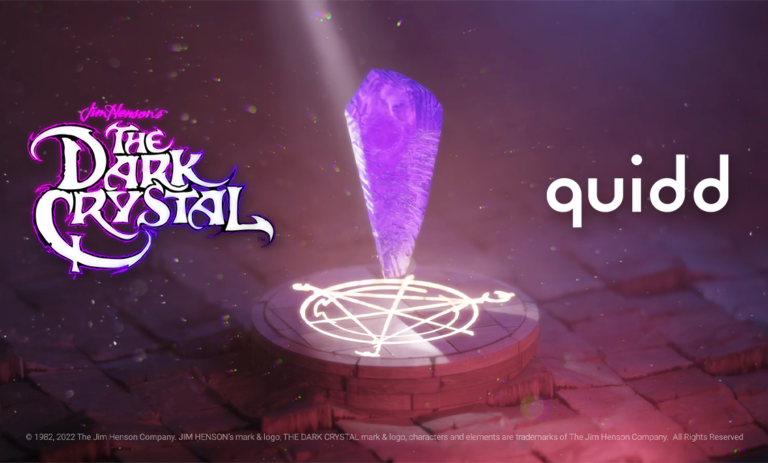 (June 8, 2022) – The Jim Henson Company, established leader in family entertainment, has partnered with Quidd, the original digital collectibles and NFT marketplace and studio, owned by Animoca Brands, to launch an NFT initiative based on Jim Henson’s 1982 fantasy classic The Dark Crystal, in celebration of the 40th anniversary of the film’s release.

Quidd, founded in 2016, is the first marketplace built for buying and selling limited-edition, individually serialized digital collectibles and NFTs. With its unique mintables technology and easy-to-use platform, Quidd brings accessible digital and NFT collecting to mass audiences, regardless of their crypto experience.

These new collections will bring The Dark Crystal universe and characters to life in digital and blockchain collectibles. Using Quidd’s unique Mintables technology, they are also the opportunity for millions of Henson fans to easily collect their first NFT by seamlessly minting items purchased with a credit card, with no crypto knowledge needed.

“It’s incredible to be able to build collections around a movie as impactful and deeply rooted in its lore as The Dark Crystal”, said Sam Barberie, VP of Content at Quidd. “The most important elements for us are making sure we’re true to what everyone loves about this movie, and that there are so many accessible and awesome ways to get involved in this collaboration.”

“Jim Henson’s The Dark Crystal was groundbreaking entertainment, and now Quidd is providing our fans a whole new way of engaging with the world of Thra with an innovative digital product experience in the form of NFT collectibles,” said Melissa Segal, Head of Global Consumer Products for The Jim Henson Company.

The first drop features a limited series of cards and collectibles showcasing the film and the journey of Jen, that will serve as the gateway to the entire Dark Crystal digital collecting universe and unlock unique events and coveted merchandise. Subsequent collections will include The Quidd Collectibles series, a collectible card game with unique, unlockable Dark Crystal rewards, an archival art series with behind-the-scenes conceptual drawings, and a hyper-limited 3D NFT series.   Each collection offers fans an opportunity to receive unique Dark Crystal giveaways, prizes, and experiences. The first collection drops soon.

About Quidd
Quidd, a subsidiary of Animoca Brands, is the original digital collectibles and NFT marketplace. For over five years, Quidd has worked with the world’s most prominent brands including Disney, HBO, Funko, and over 300 others in bringing fan-first collecting to digital and blockchain platforms. The Quidd marketplace is the most innovative, robust, and accessible platform for digital and NFT collecting experiences.  Visit https://market.onquidd.com and find the apps here.

About The Jim Henson Company
The Jim Henson Company has remained an established leader in family entertainment for over 60 years and is recognized as an innovator in puppetry, animatronics, and digital animation. Henson’s most recent television credits include Fraggle Rock: Back to the Rock, Harriet the Spy and Fraggle Rock: Rock On!, all for Apple TV+, Word Party Presents: Math! for Netflix, Duff’s Happy Fun Bake Time for discovery+, Earth to Ned for Disney+, and the Emmy®-winning Netflix Original series The Dark Crystal: Age of Resistance. Other TV productions include Word Party (Netflix), Dinosaur Train (PBS), Splash and Bubbles (PBS), Sid the Science Kid (PBS), and Julie’s Greenroom (Netflix), as well as Fraggle Rock, The Storyteller, and the sci-fi series Farscape. Feature film credits include The Star (Sony Pictures Animation), Alexander and the Terrible, Horrible, No Good, Very Bad Day (Disney), and the groundbreaking fantasy classics The Dark Crystal, and Labyrinth. The Company is currently in production on Guillermo Del Toro’s Pinocchio for Netflix and the feature film The Portable Door.