Three Best Friends Use their DIY Skills to Save the Day 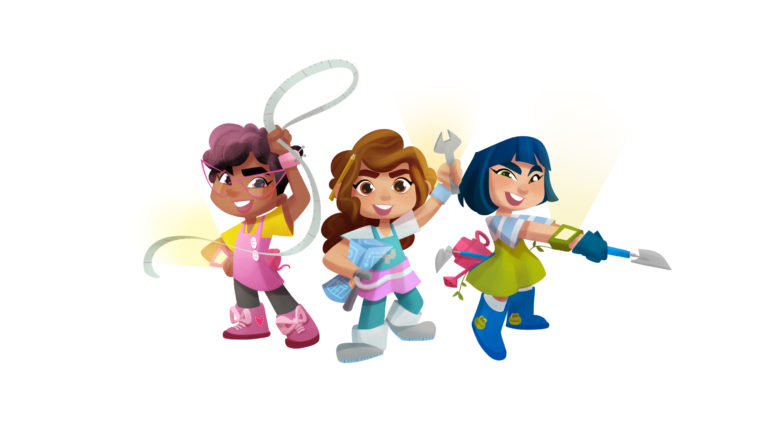 Created by Anne-Marie Asner (Founder, Matzah Ball Books; Co-Founder, Animation Israel), Gizmo Girls stars three brave best friends, Cedar, Lacy and Sage, who use their hands-on skills, heartfelt humor and super-sized doses of Wowww! to come to their town’s rescue. When structures are shredded or designs are demolished, everyone – from peers to parents – knows to call on the Gizmo Girls. This tool-toting trio, poised with skills, synergy, and a plan, is suited up to save the day, whether creating an assembly line snack-making machine, growing a giant prize-winning pumpkin, or crocheting a wall-climbing ladder!

“We’re thrilled to be partnering up with GoldieBlox, an innovative brand that empowers girls to achieve their dreams through STEAM. The Gizmo Girls, our DIY superheroes, will respond to the challenges in their world and inspire our audience to design, invent, and build anything they can imagine,” said Halle Stanford, President of Television for The Jim Henson Company.

“Gizmo Girls aligns perfectly with GoldieBlox’s mission to close the gender gap in STEM and we couldn’t be prouder to partner with the legendary Jim Henson Company to help bring this project to life. Anne-Marie’s empowering trio of maker characters are great role models for girls and boys alike and we look forward to collaborating with this amazing team on a series that will have such a positive impact on the next generation,” said Debbie Sterling, Founder & CEO of GoldieBlox.

ABOUT GOLDIEBLOX
GoldieBlox is a children’s multimedia company on a mission to make Science, Technology, Engineering and Math (STEM) fun and accessible for all kids, especially girls, who have been underrepresented in STEM fields. Founded by Stanford engineer Debbie Sterling, GoldieBlox is known for “disrupting the pink aisle” and challenging gender stereotypes with the world’s first girl engineer and coder characters in children’s toys. For the past decade, GoldieBlox has inspired millions of girls around the world with videos, animation, books, apps, curriculum, toys, and merchandise; the tools that empower girls to build their confidence, dreams and ultimately, their futures.

GoldieBlox has been recognized as a disruptive leader in children’s entertainment and has reached billions of consumers through TV, radio and digital as the first startup company to win a free Super Bowl commercial and have a float in the Macy’s Thanksgiving Day Parade. GoldieBlox and its founder, Debbie Sterling, have won numerous awards, including the Toy Industry’s Educational Toy of the Year Award, Fast Company’s list of Most Innovative Companies, Fortune’s 40 Under 40, President Obama’s Ambassadorship for Global Entrepreneurship, and the National Women’s History Museum’s “Living Legacy” award for inspiring girls around the world.