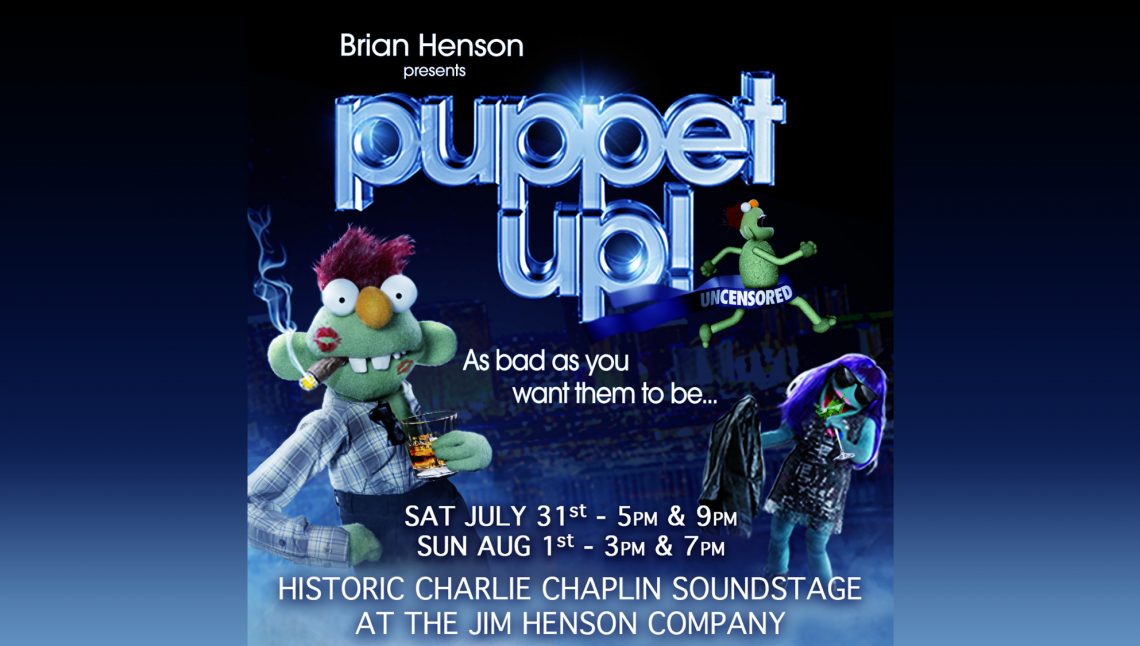 Hollywood, CA (June 23, 2021) -Henson Alternative’s Puppet Up! – Uncensored is back to celebrate summer and welcome Los Angelenos to enjoy a night of adult comedy for four performances only: Saturday, July 31st at 5pm & 9pm and Sunday, August 1st at 3pm & 7pm.

The award-winning, critically acclaimed live show will be hosted on The Jim Henson Company’s historic lot in Hollywood. Built by Charlie Chaplin and a legendary part of movie history, the lot is a classic destination that is not to be missed.

“Our performers have been waiting not-so-patiently for the opportunity to do this show again as it is meant to be seen. On stage. Live. With an audience. There is sure to be a lot of pent-up energy in the room from the puppeteers and the audience, making for some very memorable and much-needed comedy,” said Brian Henson, chairman of the board at The Jim Henson Company and co-creator of Puppet Up! – Uncensored.

Created by award-winning director and producer, Brian Henson (“Muppet Christmas Carol”, “Muppet Treasure Island”), and actor, director, and improv expert Patrick Bristow (“Ellen,” “Seinfeld,” “Curb Your Enthusiasm,” “Whose Line Is It Anyway?”), Puppet Up! – Uncensored promises to deliver a completely unique experience (it’s never the same show twice!), and expertly combines dynamic and spontaneous off-the-cuff comedy with the unmatched talent and creativity of Henson puppeteers. Based on suggestions from the audience, the puppet anarchy is two shows in one: the improvised puppet action projected live on screens above the stage, and the puppeteers racing around below in full view of the audience to bring it all to life. The show also features recreations of classic pieces originally created by Jim Henson, Jane Henson, and Frank Oz that haven’t been seen by live audiences in decades.

Tickets are on sale now at puppetup.tix.com for General Admission ($60) and VIP tickets ($150; includes priority seating, a souvenir, and a 90-minute preshow experience including a tour and question & answer with Brian Henson). A limited amount of advance purchase parking is also available for $15.00. Doors open and full cash bar will be available starting an hour before the show. Puppet Up! – Uncensored is not recommended for anyone under 16 and anyone under 14 will not be admitted.

About Henson Alternative
Henson Alternative is The Jim Henson Company’s label for content created specifically and exclusively for adult audiences. In 1955, Jim Henson’s first television production “Sam & Friends” appeared on late-night television as a lead-in to “The Tonight Show,”  establishing a standard in the Company’s work for irreverent, creative comedy projects that spoke to adults. Appearances on “The Jimmy Dean Show,” “The Ed Sullivan Show,” and “Saturday Night Live,” as well as numerous short films for clients like IBM and AT&T, proved that Henson puppetry was not limited to children.  Today, Henson Alternative continues to produce and develop projects for this audience.  Credits include “The Curious Creations of Christine McConnell” (Netflix), “The Happytime Murders” (STX), “No, You Shut Up!” (Fusion), “Neil’s Puppet Dreams” (Nerdist), “Tinseltown” (Logo), and “Puppet Up! – Uncensored” (a live puppet improvisational show named one of the top 10 “Best Stage Shows” by Entertainment Weekly).

The Miskreant Puppets are the motley troupe of puppets featured in many Henson Alternative productions like “The Happytime Murders,” “Puppet Up! – Uncensored,” and “No, You Shut Up!”