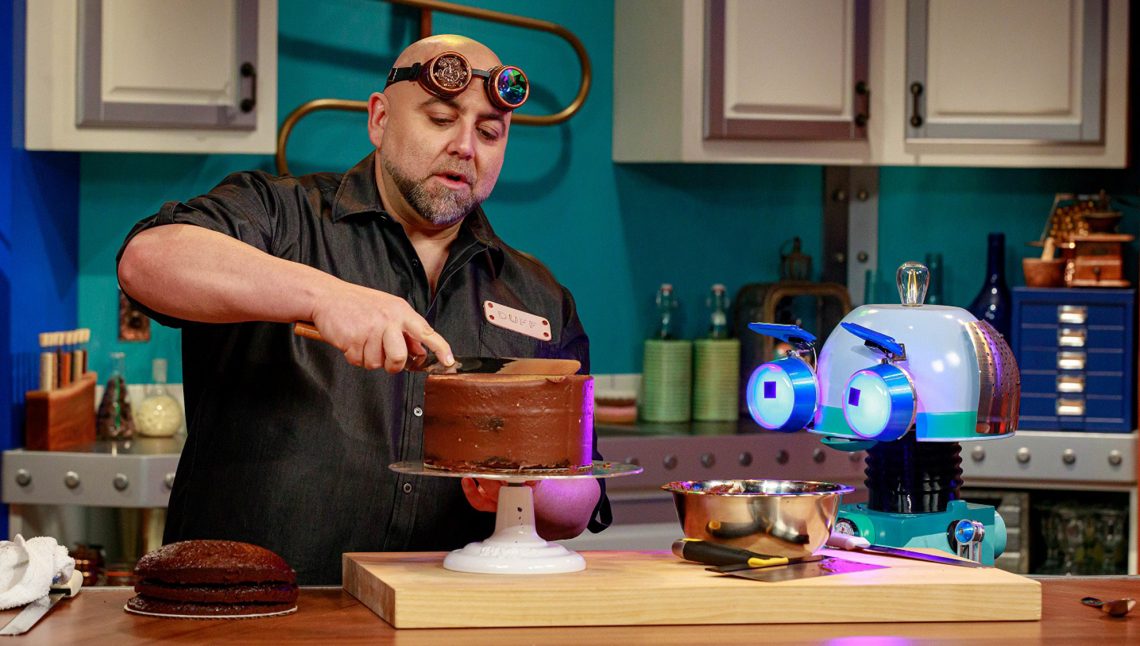 The All-New Series Will Be Available to Stream Exclusively on Discovery+ Beginning on Thursday, April 29th

New York — March 23, 2021 – Beginning on Thursday, April 29th join Duff Goldman in his laboratory kitchen, along with his puppet crew as they explore the science behind cooking and baking to create some of the most popular foods on the new discovery+ series from The Jim Henson Company, Duff’s Happy Fun Bake Time. Each of the six half-hour episodes is a flavorful adventure that goes beyond food rules and recipes to discover how ingredients work together to create delicious dishes and desserts. With comedy and whimsical fun, Duff and his entertaining puppet friends teach fundamental cooking techniques and tasty, easy-to-make recipes that inspire chefs of all ages to experiment in the kitchen. It’s always a fascinating food adventure with Duff and his friends!

“From the creative imaginations of superstar baker Duff Goldman and the iconic Jim Henson Company, Duff’s Happy Fun Bake Time is a magical collaboration that led to the creation of a series unlike any other,” said Courtney White, President, Food Network.”

““I think cooking is absolutely fascinating and I wanted to make a show that explained why things happen the way they do in the kitchen. When I understand the science behind the food I make, I somehow feel more connected to it and I wanted to share that with everyone,” said Duff Goldman.

In the land of Bakersburg, Duff goes on a journey of food discovery with his puppet team created by Jim Henson’s Creature Shop, including Couscous, his robot sidekick and sous chef, Dizzy, the enthusiastic industrial mixer and literal elephant-in-the- room who loves to stick her nose into everything going on in the kitchen, Edgar, the crabby crab straight out of the Chesapeake Bay, S’Later, the wise and quizzical, slow moving sloth, and Dragon Oven, who communicates with roars, hiccups, and smoke. Duff is also regularly visited by his musical grocer Geof (played by Duff’s real long-time executive sous chef, and songwriter, Geof Manthorne).

In each episode, Duff and his friends learn interesting science lessons with food experiments, from what happens if you bake a birthday cake without eggs, to why patience is the most important ingredient to baking the Best Bread on Earth, and why taste buds tingle with delight when mixing salty and sweet flavors. The fun doesn’t stop as Duff and his gang explore cake, bread, ice cream, pasta, chocolate, and other favorite food items.

“With its unique blend of science, mouthwatering dishes, and whimsical adventure, this is a show the whole family will want to watch together,” said Lisa Holme, Group SVP Content and Commercial Strategy discovery+.

“From battling a sea monster, to meeting aliens, to befriending a robot, a sloth, and a crab, Duff wanted to play in a dream fantasy kitchen, and we wanted to bring all of his hilarious puppet dreams to life!” said Halle Stanford, President of Television for The Jim Henson Company. “Duff’s enthusiasm and creativity matched perfectly with our own passion to keep families excited to explore and play together in the kitchen.”

discovery+
discovery+ is the definitive non-fiction, real life subscription streaming service. discovery+ features a landmark partnership with Verizon that gives their customers with select plans up to 12 months of discovery+ on Verizon. discovery+ has the largest-ever content offering of any new streaming service at launch, featuring a wide range of exclusive, original series across popular, passion verticals in which Discovery brands have a strong leadership position, including lifestyle and relationships; home and food; true crime; paranormal; adventure and natural history; as well as science, tech and the environment, and a slate of high-quality documentaries. For more, visit discoveryplus.com or find it on a variety of platforms and devices, including ones from Amazon, Apple, Google, Microsoft, Roku and Samsung.